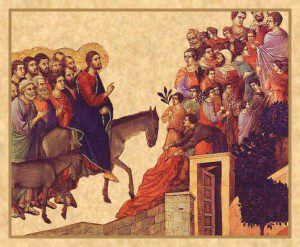 Every year on the Sunday before Easter – the sixth Sunday of Lent – the church celebrates “Palm Sunday.” Most general calendars list the day as “Palm Sunday,” but if you look closely at a liturgical calendar you will see that it is actually called “Palm Sunday of the Lord’s Passion.” The name is appropriate as it celebrates Jesus’ triumphal entry into Jerusalem but also commemorates the beginning of Holy Week and Jesus’ final journey to the cross.

But that wasn’t always the name of the sixth Sunday of Lent.

A Short Liturgical History
The last two weeks of Lent has undergone many changes in names as well as what gospel(s) is proclaimed on the two Sundays. Older Catholics might remember “Passiontide” when the fifth Sunday of Lent was known as “Passion Sunday” and the gospel was the reading of the Passion followed by Palm Sunday with a gospel telling of Jesus’ entry into Jerusalem. To our sense, it seems a bit backward seems to be cutting Lent short. In the 1950s there were some name changes, but it was not until 1970 that we arrived at the current configuration: “Palm Sunday of the Passion of the Lord”.

What is the basic story of the entry into Jerusalem?
All the account, with differing details, point to Jesus entering the city riding upon animal (donkey, ass, colt), the people waving or spreading plants/palms on the way, as some shouts of praise or honor. Here is one of the gospel accounts:

“Go into the village opposite you, and immediately you will find an ass tethered, and a colt with her. Untie them and bring them here to me. 3 And if anyone should say anything to you, reply, ‘The master has need of them.’ Then he will send them at once.” 4 This happened so that what had been spoken through the prophet might be fulfilled: 5 “Say to daughter Zion, ‘Behold, your king comes to you, meek and riding on an ass, and on a colt, the foal of a beast of burden.’” (Matt 21:2-5)

Why is Jesus entering the city on a donkey?
Actually Luke and Mark describe the animal as a colt upon which no one has ever ridden. John simply describes the animal as an “ass.” Matthew is more complicated: on an ass, and on a colt, the foal of a beast of burden. But all the gospels point to Zechariah 9:9-10 when narrating the story of Jesus’ entry to Jerusalem. In Zechariah a Messiah-king is described as entering the city riding on an “ ass, on a colt, the foal of an ass.” This messiah-king is the one who will liberate and bring peace to Israel. Zechariah describes the proper response of the people as “Rejoice heartedly ….shout for joy.” The people are hailing Jesus as the one prophesized by Zechariah – even if they don’t have a full understanding of all that is implied or that awaits Jesus.

Why are the people waving palm branches?
It is at least a little ironic to refer to this as “Palm Sunday.” Actually only John (12:13) mentions “palm branches.” Matthew mentions “branches from the trees” while Mark describes them as “leafy branches.” Luke mentions nothing about any foliage.

Be that as it may, why “palms?” It was a common custom in many lands in the ancient Near East to cover the path of someone thought worthy of the highest honor. The Hebrew Bible reports that Joshua was treated this way. The gospels of Mark, Matthew and John report that people gave Jesus this form of honor. In the Matthew/Mark they are reported as laying their garments and cut branches on the street, whereas John more specifically mentions palm fronds.

The palm branch was a symbol of triumph and of victory in Jewish tradition, and is treated in other parts of both the Jewish and Christian scriptures as such (e.g. Leviticus 23:40 and Revelation 7:9). Because of this, the scene of the crowd greeting Jesus by waving palms and carpeting his path with them has given the Christian festival its name.

Why is the “Passion of the Lord” part of the celebration?
There are two gospels read on that day.  At the beginning of Mass, there is a reading of the triumphal entrance into Jerusalem.  During the normal spot in the Mass, the Passion is read.  In a way is captures the speed at which things changed in the fews days between the entry and the subsequent arrest, passion, and death by crucifixion.

On a practical level, if one is not able to “follow” the whole story by attending the celerbations on Holy Thursday and Good Friday, then the dual readings ensure you hear the “whole story” before the reading of the Resurrection accounts on Easter Sunday.
Preparing Your Home
© 2022 Sacred Heart Catholic Church
Made with ♥ by Diocesan