The history of Catholicism on the West Coast of Florida goes all the way back to the Spanish explorers of the 1500s and the missionaries they brought with them. Jesuit priests established an outpost in the late 1500s in what would later become Tampa, but circumstances caused it to be abandoned after about three years. 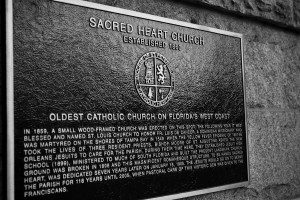 A Catholic Parish in Tampa
In the early 1850s, Hillsborough County commissioners deeded property at Ashley Drive and Twiggs Street for a Catholic church. The property was later exchanged for land at Florida Avenue and Twiggs.  In 1859, a little frame church was erected on the site of the present Sacred Heart Church. It was blessed on Trinity Sunday and named St. Louis Parish in honor of King Louis IX of France, a leader in the Crusades, and in memory of Fr. Luis Cancer, a Dominican missionary from Spain who was martyred on the shores of Tampa Bay in 1549. St. Louis parish was officially constituted in February of 1860 with the arrival of Fr. Charles S. Mailley as resident pastor. The 27-year old priest had been recruited in France only a few months earlier.

The parish grew along with Tampa. Anticipating the need for a larger facility, two wings were added to its modest building in 1883, nearly doubling its seating capacity. A dreadful yellow fever epidemic took a heavy toll on the populace in 1887-88. The parish lost three pastors within a year, two of them in rapid succession. Bishop John Moore of the Diocese of St. Augustine had lost nearly a quarter of his priests to the malady and had no one else to send to this beleaguered area. Those founding pastors and his successors are buried in St. Louis Cemetery in downtown Tampa.

Jesuit Pastoral Leadership
He turned to the Jesuits of the South, where 63-year old Fr. Philippe de Carriere, S.J. volunteered to take the post. The parish remained under Jesuit auspices from 1888 until 2005. By 1891, the Jesuit missionaries had assumed the spiritual care of Catholics in most of South Florida. St. Louis Parish stretched all the way to Key West, including its former diocesan church of Mary, Star of the Sea. The missionaries who covered this vast area have been credited with establishing at least 30 parishes and countless missions and stations over the next half-century.

Sacred Heart Church
Tampa began to boom with the arrival of Henry Plant’s railroad in 1884 and his Tampa Bay Hotel (now the cornerstone of the University of Tampa) in 1891. In 1897, pastor Fr. William Tyrrell, S.J. announced that a new church would be built. Ground was broken for our present church on February 16, 1898. The beautiful new structure was dedicated on January 15, 1905, and its name and that of the parish became Sacred Heart.

The Jesuits built the church – at a cost of $300,000 – and named it Sacred Heart. Today, the building looks strikingly similar to the original. The Romanesque architecture remains. The exterior is a combination of granite and white marble. Inside, most of the design is just as it was a century ago. 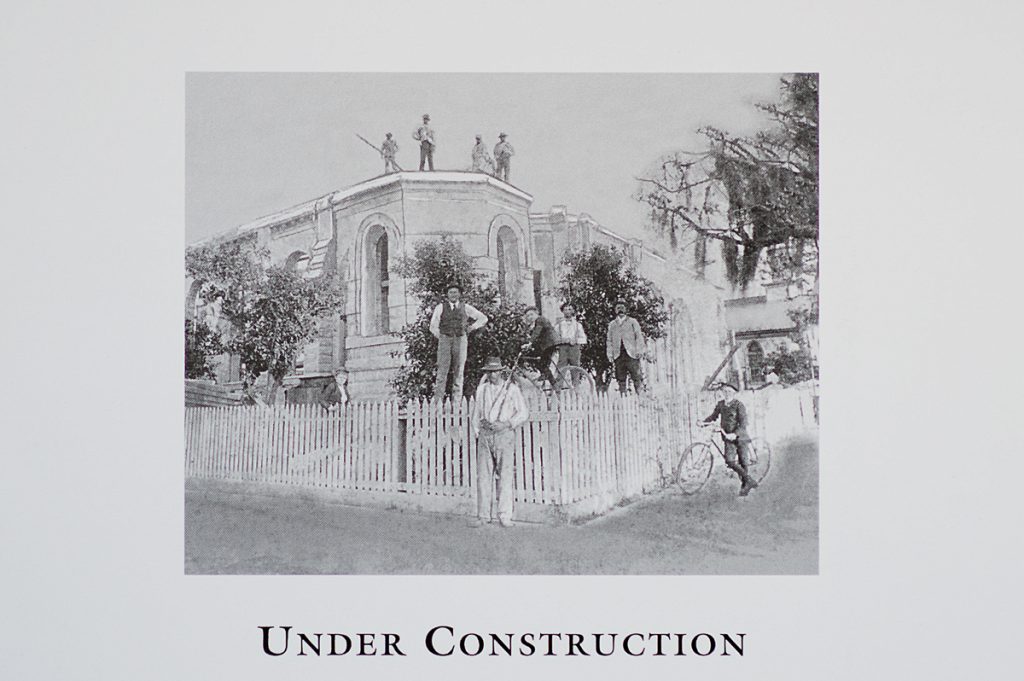 The Resurrection Window on the left side of the transept (the part of the church representing the arms of the cross) is a triptych, with three panels. Like the other major windows at Sacred Heart, it tells a story. The center panel presents the risen Christ, triumphant over death. He floats over the tomb, carrying a heavenly banner, his right hand raised in a benediction. An angel alights beneath him, gazing at the stunned soldiers who guarded his tomb. The two smaller panels record incidents preceding this apotheosis, one of the Virgin Mary in blue, with Mary Magdalene and Martha approaching the tomb, and the other of two soldiers fleeing as it opens.

Sacred Heart and Education
The Jesuits have always been scholars with a keen interest in education. As missionary work diminished, their efforts turned more and more toward teaching. What is now Jesuit High School began at St. Louis parish in 1899 in the sacristy of the church. The school was housed on the downtown site until 1956, when its operations were separated from the parish and moved to its present campus on North Himes Avenue. The parish established Sacred Heart Academy in 1931, about a mile and a half north of the church on Florida Avenue. Initially it was an elementary school, which expanded to include high school classes until 1971. It was staffed by the Sisters of the Holy Names of Jesus and Mary for 51 years, followed by School Sisters of Notre Dame for the next decade. In 2012, after 81 years of service to the Tampa community, the doors of the school closed.

Franciscan Transition
Jesuits began divesting themselves of parish work in Florida in the early 2000s. Just one week after celebrating the 100th anniversary of the dedication of Sacred Heart Church, on January 15, 2005, the announcement came that the Jesuits would be relinquishing their beloved parish.

The transition from Jesuits to Franciscans took place on July 15, 2005 at a Welcome Mass celebrated by Bishop Robert N. Lynch of the Diocese of St. Petersburg. Fr. Andrew Reitz, OFM was formally installed as the first Franciscan pastor of the parish on January 9, 2006. The parish continues to thrive and grow not only in numbers, but also in the involvement of parishioners in various ministries and organizations.

Spotlight on Founding Families
At the 150th anniversary of the parish, the names of the founding families and first parishioners were published and honored. They include: