About Us > Being Franciscan > Franciscan Feast Days > Dedication of the Papal Basilica of St. Francis of Assisi

The Feast of the Dedication of the Papal Basilica of St. Francis of Assisi: May 25th

The Papal Basilica of St. Francis of Assisi is the mother church of the Order of Friars Minor, commonly known as the Franciscan Order, in Assisi, Italy, the city where St. Francis was born and died. The basilica is one of the most important places of Christian pilgrimage in Italy. With its accompanying friary, the basilica is a distinctive landmark to those approaching Assisi. It has been a UNESCO World Heritage Site since 2000.

The Basilica Complex
St. Francis of Assisi died in October 1226 and was interred in the church of San Georgio in Assisi. Given the fame of the saint and the attending miracles, Pope Gregory ordered his beatification and the building of a church in his honor. In 1228, work and planning on the basilica complex was begun. Simone di Pucciarello donated the land for the church, a hill at the west side of Assisi, known as “Hill of Hell” where previously criminals were put to death. Today, this hill is called “Hill of Paradise.” One tends to think Francis would appreciate the conversion.

On July 16, 1228, Francis was canonized by Pope Gregory IX in Assisi, and he laid the foundation stone of the new church the following day, although construction may already have been begun. Since the construction was begun at his order, the Pope declared the church to be the property of the papacy and thus a “papal basilica.” The church was designed and supervised by Brother Elias of Cortona, one of the first followers of St. Francis and the former Vicar General of the Order under St. Francis.

One unique feature was that the basilica was designated as a pilgrimage site eligible for the same graces and honor as a papal pilgrimage to the Holy Land. At the time, that was a radical change and served to highlight the esteem with which Francis was held. 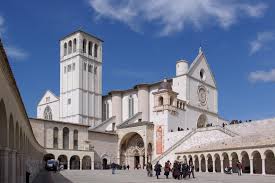 The basilica is built into the side of a hill and is comprised of two churches known as the Upper Church and the Lower Church, and a crypt where the remains of St. Francis are interred. The Lower Basilica was the first finished and was completed in 1230. Next to the basilica stands the friary Sacro Convento. The whole complex towers over the valley below, giving the impression of a fortress. The friary now houses a vast library of medieval documents (codices and incunables) and a museum with works of art donated by pilgrims through the centuries, as well as works of art of the Perkins collection.

Transfer of St. Francis from San Georgio to the Basilica
On Pentecost, May 25, 1230, the uncorrupted body of St. Francis was brought in a solemn procession to the Lower Basilica from its temporary burial place in the church of St. George, now the Basilica of Saint Clare of Assisi. In fact, only the casket was processed on Pentecost, the actual body had been transferred several days earlier for fear that zealous people would dismember the body of the saint in their desire for relics or that the people of the rival city of Perugia would attempt to “kidnap” the remains.

The early transfer of the body of Francis caused a controversy with Pope Gregory IX. The pope excommunicated the citizens of Assisi for moving the relics without episcopal authority and placed an interdict on the Basilica of Saint Francis – though these punishments were later rescinded.

The burial place within the basilica was concealed and secreted for fear that St Francis’ remains might be stolen and dispersed. In 1818, the burial crypt was discovered and is now accessible from the nave of the lower Basilica.