The Feast of Our Lady of the Angels of the Portiuncula: August 2nd 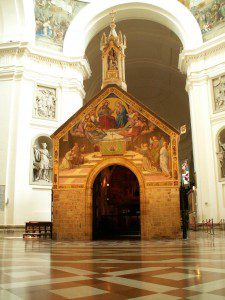 August 2nd is a special day to all Franciscans as it recalls the small Assisi-area chapel that became the foundational home of the Franciscan family – the Porciúncula. It is a place rich in the memory of all Franciscans, and its legacy reaches far and wide. Even as far as California!

The City of Angels
Everyone knows the “City of Angels,” or Los Angeles, CA.  But did you know that the name is only the shortened form of the original city name, which grew up around one of the Franciscan missions? The original name of the pioneer town was “El Pueblo de Nuestra Señora la Reina de los Ángeles de Porciúncula” (in English, “City of Our Lady the Queen of Angels of the little Portion”). The Franciscan mission would have lent the Porciúncula to the name, but what is the origin of the remainder of the original name? For that we return to the 13th century and the life of St. Francis of Assisi.

Queen of the Angels
In 1206, when Francis was struggling to determine what it was he was to do with his life, he prayed in the little church of San Damiano just outside the walls of Assisi. There he heard the Word of God saying to him, “Francis, rebuild my church which you see is falling into ruin.” Taking that command very literally, Francis set about rebuilding the little church – stone by stone. He did the same with other abandoned churches in the area. One of them was an abandoned Benedictine chapel in the valley outside Assisi called the porciúncula or “little portion,” referring to the small plot of land associated with the chapel.

In 1209, after returning from a visit to Pope Innocent III, during which Francis received permission to form a “religious order,” Francis and the first brothers took up residence at the porciúncula. The formal name of the chapel was “Our Lady Queen of the Angels.” Now you can see the connection for the Franciscans to name their Californian mission “El Pueblo de Nuestra Señora la Reina de los Ángeles de Porciúncula.” Eventually, the mission became a city and the name was truncated to “Los Angeles.” 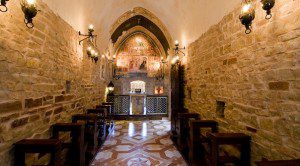 The Portiuncula Today
The chapel has been repaired, partially rebuilt, and enhanced over the years. You can still visit the chapel, but now the little chapel of Porciúncula is housed within a huge basilica (Basilica of Santa Maria degli Angeli).

It was also to the Porciúncula that Francis asked to be taken when he knew that his death was near. Thomas of Celano also records those events. “…For he wanted to give back his soul to God in that place where, as noted above, he first came to know perfectly the way of truth…. After he had rested a few days in that place he so longed for, knowing the time of his death was close at hand, he called to him two brothers, his special sons, and told them to sing The Praises of the Lord with a loud voice and joyful spirit, rejoicing at his approaching death, or rather at the life that was so near.”

The Portiuncula is the Franciscan Tradition
St. Bonaventure, a Minister General of the Franciscan Order and the author of the Major Life of St. Francis (LgMaj 2:8) wrote:

“When he finally completed this church [San Damiano], he came to a place called the Portiuncula where there stood a church of the most Blessed Virgin Mother of God, built in ancient times but now deserted and no one was taking care of it. When the man of God saw it so abandoned, he began to stay there regularly in order to repair it, moved by the warm devotion he had toward the Lady of the world. Sensing that angels often visited there, according to the name of that church, which from ancient times was called Saint Mary of the Angels, he stayed there out of his reverence for the angels and his special love for the mother of Christ.

This place
the holy man loved more than other places in the world;
for here he began humbly,
here he progressed virtuously,
here he ended happily.
This place
he entrusted to his brothers at his death
as the most beloved of the Virgin.

Before his conversion, a certain brother, dedicated to God, had a vision about this church, which is worth telling. He saw countless people who had been stricken with blindness, on their knees in a circle around this church, with their faces raised to heaven. All of them, with tearful voices and uplifted hands, were crying out to God, begging for mercy and light. Then a great light came down from heaven and, diffusing itself through them, gave each the sight and health they desired.

This is the place
where the Order of Lesser Brothers
was begun by Saint Francis
under the prompting of divine revelation.
For at the bidding of divine providence
which guided Christ’s servant in everything,
he built up three material churches
before he preached the Gospel
and began the Order not only
to ascend in an orderly progression
from the sensible to the intelligible,
from the lesser to the greater,
but also
to symbolize mystically
in external actions perceived by the senses
what he would do in the future.
For like the three buildings he built up,
so the Church
—where there is victory
for the triple army of those being saved—
was to be renewed in three ways
under his leadership:
by the form, rule, and teaching of Christ
which he would provide.
And now we see
that this prophecy has been fulfilled.”

The Portiuncula Indulgence
In 1216, in a vision, it was reported that St. Francis obtained from Jesus himself the Indulgence of the Pardon of Assisi. According to tradition this Indulgence was verbally approved by Pope Honorius III. This tradition’s historical authenticity is still a subject of dispute. The controversy arises from the fact that none of the earliest accounts of St. Francis mentions the Indulgence, and no contemporary document or mention of it has come down to us. The oldest document dealing with the Indulgence is a notary’s deed of October 31, 1277, in which Blessed Benedict of Arezzo, whom St. Francis himself received into the order, testifies that he had been informed by Brother Masseo, a companion of St. Francis, of the granting of the Indulgence by Honorius III at Perugia.

The original conditions of the Indulgence were a visit to the Portiuncula chapel on August 2nd, connected with the celebration of sacramental Confession, Holy Communion, and prayer for the intentions of the Pope, and reciting at least the Lord’s Prayer and the Creed. To gain this, as any plenary indulgence, the faithful must be free from any attachment to sin.

Nonetheless, Pope Sixtus IV extended the Indulgence from the Portiuncula to all churches of the Franciscans (1481). Since then the Indulgence has been renewed and expanded several times. In 1967, Pope Paul VI confirmed the permanence of the Indulgence for August 2nd at Franciscan churches worldwide.