About Us > Being Franciscan > Franciscan Feast Days > The Stigmata of St. Francis of Assisi

The Feast of the Stigmata of St. Francis of Assisi: September 17th

Authorized by Pope Paul V, September 17th is the Feast of the Stigmata of St. Francis of Assisi, a feast day celebrated within the Franciscan communities.

Stigmata, from the Greek word, generically points to a “brand” or a “mark.” It is the common word to describing branding of cattle. In the Christian context it refers to the bodily marks resembling the wounds of the crucified Christ. St. Francis was the first person, historically recorded, who bore the marks of the crucified Christ in his hands, his feet, and in his side.

The feast is a reminder of the power of love, as seen in the opening prayer for the festal Mass:

“Lord Jesus Christ, who reproduced in the flesh of the most blessed Francis, the sacred marks of your own sufferings, so that in a world grown cold our hearts might be filled with burning love of you, graciously enable us by his merits and prayers to bear the cross without faltering and to bring forth worthy fruits of penitence: You who are God, living and reigning with God the Father, in the unity of the Holy Spirit, for ever and ever. Amen.” 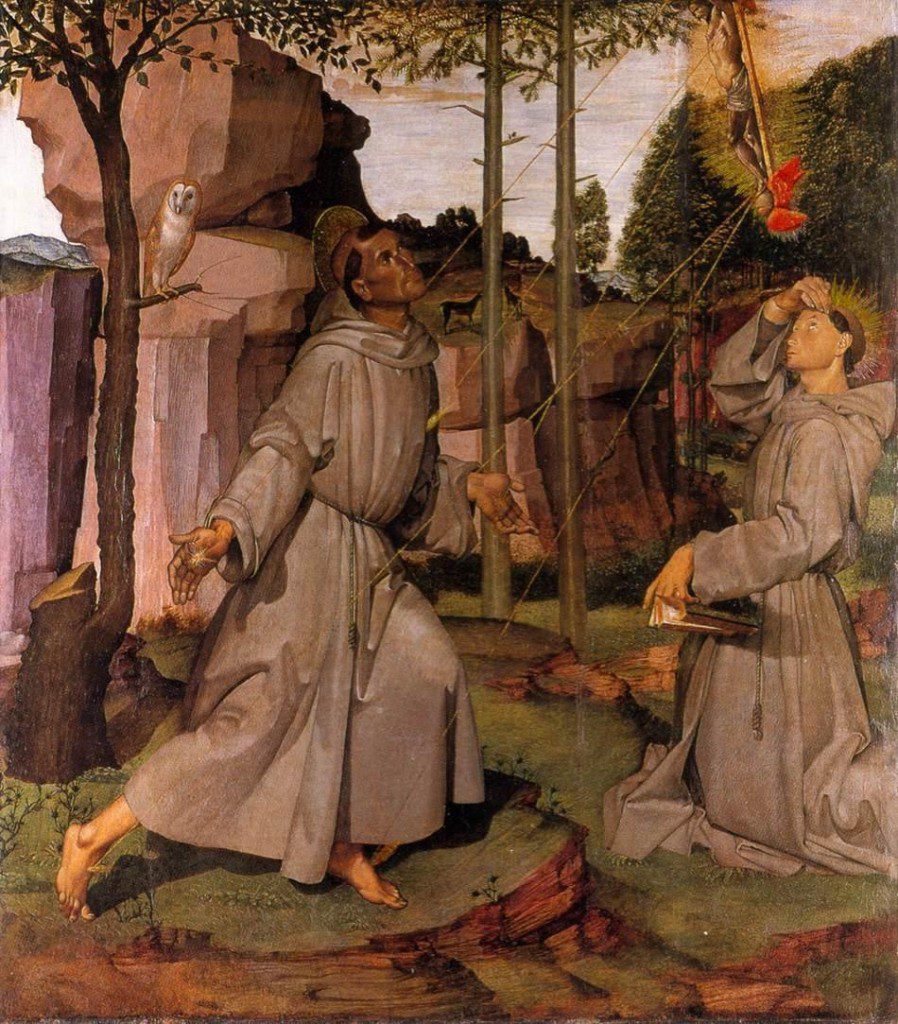 Receiving the Stigmata
On the day after Francis died, October 3, 1226, the Minister General of the Franciscan Order, Brother Elias, released a letter to all the friars informing them of Francis’ passing. In the letter he wrote: “I announce to you a great joy and a new miracle. It is a sign, which has been unheard of from the very beginning of time except in the Son of God, Christ the Lord. Not long before his death, our brother and our father was seen to resemble the crucified Lord, bearing in his body the five wounds which are the marks of Christ.”

Yet these were not marks that Francis received on his body while at death’s door. He received the marks some two-years prior while in prayer on the remote mountaintop of Mt. Alverna (also known as La Verna). Francis had gone there with two other friars, Brother Leo being one. While deep in prayer on a day near the Feast of the Exaltation of the Cross, a seraph (angel) appeared. The seraph was seemingly crucified on a cross. Thomas of Celano, writing within a few years of Francis’ death (ca. 1229), described what happened as Francis contemplated the possible meaning of the vision:

“…the marks of nails began to appear in his hands and feet, just as he had seen them slightly earlier in the crucified man above him. His wrists and feet seemed to be pierced by nails, with the heads of the nails appearing on his wrists and on the upper sides of his feet, the points appearing on the other side. The marks were round on the palm of each hand but elongated on the other side, and small pieces of flesh jutting out from the rest took on the appearance of the nail-ends, bent and driven back. In the same way the marks of nails were impressed on his feet and projected beyond the rest of the flesh. Moreover, his right side had a large wound as if it had been pierced with a spear, and it often bled so that his tunic and trousers were soaked with his sacred blood.”

St. Bonaventure later wrote: “The sight of it amazed Francis and his soul experienced joy mingled with pain. He was delighted with the sight of Christ appearing to him so graciously and intimately and yet the awe-inspiring vision of Christ nailed to the cross aroused in his soul a joy of compassionate love.”

The Question of the Stigmata
What was one to make of this vision and miraculous event? As Bonaventure wrote, “Because of this new and astounding miracle unheard of in times past, Francis came down from the mountain a new man adorned with the sacred stigmata, bearing in his body the image of the Crucified not made by a craftsman in wood or stone, but fashioned in his members by the hand of the living God.”

One issue is that the reception of the stigmata seems to possibly be an event unheard of in Christian history. There are some who argue that St. Paul was the first, as the Greek word stigmata is used in a verse at the end of the Letter to the Galatians, where he writes, “I bear on my body the marks (stigmata) of Jesus.” There were Dominicans who claimed that Blessed Walter of Strasbourg was also granted the same privilege. And there were some – and many since – who have doubted the historicity of the account, claiming fraud or later embellishment by the Franciscans themselves. One argument is that Francis himself never mentions the event or the stigmata.

Given it occurred at a point in Francis’ life when he had withdrawn from leadership of the Order, was in terrible health, and had entered a very reflective phase of this life, his lack of mention should not be surprising. Perhaps, too, he took his own counsel from Admonition 19: for what a person is before God, that he is and no more. Who can say?

We can say that Brother Leo, the only witness to the account, testified to the stigmata’s presence on Francis’ body. So too, witnesses included Brothers Rufino and Elias, Pope Alexander IV (when he was a young cardinal), and several prominent lay people of Francis’ time.

St. Bonaventure places the stigmata within a framework that emphasizes that the stigmata only appeared at the conclusion of the vision. This made them a response of divine love to human love through the intermediary of the Christ-seraph, who transformed the friend of Christ that was Francis into the likeness of the one whom he loved.  As a result the flesh of the stigmatized was presented as the exterior manifestation of a mystical relationship between the human person and God – proof of the transformative power of love.