About Us > Being Franciscan > Franciscan Feast Days > The Transitus of St. Francis of Assisi

The Transitus of St. Francis of Assisi: October 3rd

Each year on the evening of October 3rd the Franciscan family throughout the world pauses to celebrate the solemnity of our Holy Father Francis’s Transitus, passing over from this life to the next. In his famous Canticle of the Creatures, the saint from Assisi wrote “Praised be You, my Lord, through our Sister Bodily Death, from whom no one living can escape.” That line, written near Francis’s own embrace of Sister Bodily Death, reflects the importance and natural character of death in the life of all creation. Francis was not afraid of what would come at the end of his earthly life, choosing instead to recognize in that experience, not an end, but a transition from one way of living to another. Br. Thomas of Celano recorded an account of that transition, that transitus:

St. Francis spent the last few days before his death in praising the Lord and teaching his companions whom he loved so much to praise Christ with him. He himself, in as far as he was able, broke out with the Psalm: I cry to the Lord with my voice; to the Lord I make loud supplication. He likewise invited all creatures to praise God and, with the words he had composed earlier, he exhorted them to love God. Even death itself, considered by all to be so terrible and hateful, was exhorted to give praise, while he himself, going joyfully to meet it, invited it to make its abode with him. “Welcome,” he said, “my sister death.” (Celano, Second Life.) 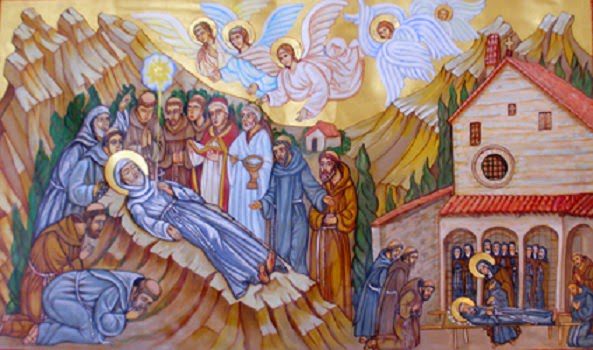 When the hour of his death approached, Francis asked that all of the brothers living with him be called to his death bed and softening his departure with consoling words, he encouraged them with fatherly affection to love God. He spoke of patience and poverty and of being faithful to the Holy Roman Church, giving precedence to the Holy Gospels before all else. He then stretched his hands over the brothers in the form of a cross, a symbol that he loved so much, and gave his blessings to all followers, both present and absent, in the power and in the name of the Crucified. (St. Bonaventure, Major Life.)

Every year on the third evening of October, Franciscans ritually remember the passing of Francis of Assisi from this life into God as a reminder to renew our own commitment to follow Christ in the way of the poor man of Assisi. A key part of the celebration is to read and reflect upon the Gospel passage the Francis asked his brothers to read aloud, gathered at his death bed. The brothers read the Gospel passage from the Mass of the Last Supper, Holy Thursday. This reading from the Gospel according to John (John 13:1-17), where Jesus washes the feet of his disciples, provided a glimpse into the Gospel Life that the little, poor man from Assisi sought to live, and which we his spiritual heirs have inherited. At the heart of the reading stands the example of so-called servant leadership modeled by Jesus Christ Himself.