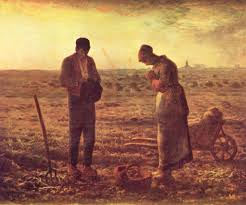 Angelus (Latin for “angel”) is a Christian devotion in memory of the Incarnation. As with many Catholic prayers, the name Angelus is derived from its incipit: Angelus Domini nuntiavit Mariæ (“… the Angel of the Lord declared unto Mary …”). The history of the Angelus is a combination of what is certain and that which has been handed down in story. What is clear is that Franciscan houses and churches were praying the Angelus by 1263. We have the liturgical texts prepared by the Franciscan Sinigardi di Arezzo that were in use in the 13th century. What is less certain, but carried in the tradition, is the origin of the prayer.

From 1220-1221, St. Francis was present in Egypt, the Holy Land, and other Muslim-held lands. It is clear that he was impressed by the very public noontime call to prayer for all people. While the noontime call to prayer was already a practice in the monasteries of Europe, it was not a practice among the people. The Angelus arose from St. Francis’ special attention to the Incarnation, his love of Mary, the Mother of God, and a desire to ensure prayer entered the daily lives of all people.

The Angelus is practiced by reciting as versicle and response three Biblical verses describing the mystery (from the Gospel according to Luke); alternating with the “Hail Mary!”

V. The angel of the Lord declared unto Mary,
R. And she conceived of the Holy Spirit.
Hail Mary, full of grace, the Lord is with thee. Blessed art thou amongst women, and blessed is the fruit of thy womb, Jesus. Holy Mary, Mother of God, pray for us sinners, now and at the hour of our death. Amen.

V. Behold the handmaid of the Lord.
R. Be it done unto me according to thy Word.
Hail Mary…

V. And the Word was made flesh.
R. And dwelt amongst us.
Hail Mary…

V. Pray for us, O Holy Mother of God.
R. That we may be made worthy of the promises of Christ.
Hail Mary…

Let us pray: Pour forth, we beseech thee, O Lord, your grace into our hearts, that we to whom the incarnation of Christ Thy Son was made known by the message of an angel, may by His Passion and Cross be brought to the glory of His resurrection; through the same Christ our Lord.
R. Amen.

By the 17th century, a set pattern had developed for this prayer. When the church bells were rung at 6 a.m., noon, and 6 p.m., short verses from Scripture were recited, each having to do with the Incarnation, each followed by a Hail Mary, and then a closing prayer.

Regina Caeli
During the Easter season, the words of the hymn “Regina Caeli” (“Queen of Heaven’) are substituted for the Angelus prayer, traditionally recited at 6 a.m., noon and 6 p.m.’

0 God, who by the Resurrection of your Son, our Lord Jesus Christ, granted joy to the whole world, grant, we beseech you, that through the intercession of the Virgin Mary, his Mother, we may enjoy the happiness of eternal life, through the same Christ Our Lord. Amen.

While the authorship of the Regina Caeli is unknown, the hymn has been traced back to the twelfth century. It was in Franciscan use, after Compline, in the first half of the following century. There is a legend that says St. Gregory the Great (d. 604) heard the first three lines chanted by angels on a certain Easter morning in Rome while he walked barefoot in a great religious procession and that the saint thereupon added the fourth line: “Ora pro nobis Deum. Alleluia.”