“Father, your gift store has rosaries that were made by someone who didn’t know the rosary. Were they made in China?” This comment came to Fr. Andrew not too long after he opened the Sacred Heart Gift & Book Store. The parishioner had noticed that some rosaries had seven decades of beads in contrast to the traditional five.  Fr. Andrew laughed and told the parishioner it was not a mistake – those rosaries were called “Franciscan Crowns.” 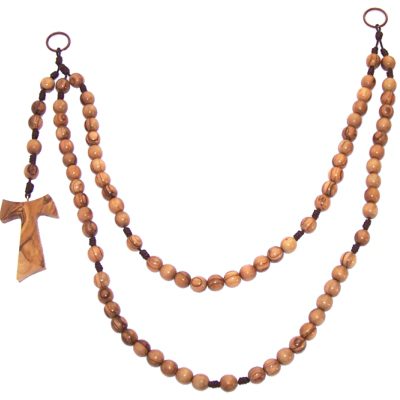 The Franciscan Crown has also been called the Franciscan Rosary, the Seraphic Rosary or the Rosary of the Seven Joys of Our Lady.

History of the Crown
The Franciscan historian, Father Luke Wadding (1588-1657) dates the origin of the Franciscan Crown to the year 1422. In 1442 an apparition of the Blessed Virgin Mary took place in Assisi, to a Franciscan novice named James. As a child, he had the custom of offering daily the Virgin Mary a crown of roses. When he entered the Friars Minor, he became distressed that he would no longer be able to offer this gift. The Blessed Virgin appeared to him to give him comfort and showed him another daily offering that he might do: to pray every day seven decades of Hail Mary prayers, meditating between each decade on one of the seven joys that she had experienced in her life. Friar James began this devotion, but one day the Director of Novices saw him praying and an angel with him who was weaving a crown of roses, placing a lily of gold between each of the ten roses. When the novice had finished praying, the angel placed the crown upon him. The Director asked Friar James what this vision meant. After hearing the explanation, he told the other friars and soon this devotion spread throughout the Franciscan family.

How to Pray the Franciscan Crown Rosary
The Franciscan Crown Rosary begins quite simply by stating the first Joy and then praying one Our Father and ten Hail Mary’s while meditating upon it. This same procedure is then followed for the other six Joys. It is common practice to add the Glory Be at the end of each decade. It is customary to finish by adding two Hail Mary’s in honor of the 72 years that Our Lady is said to have lived on earth, and one Our Father and Hail Mary for the intentions of the Pope.