About Us > Being Franciscan > Franciscan Saints > St. Clare of Assisi

The Feast of St. Clare of Assisi: August 11th

St. Clare of Assisi
August 11th is the feast of St. Clare of Assisi. Clare was born July 16, 1194 as Chiara Offreduccio the eldest daughter of Favorino Scifi, Count of Sasso-Rosso and his wife Ortolana. There are many legends of how Clare and Francis met, but it is clear that Clare would have known about Francis and his movement of brothers seeking to follow Jesus and embrace Holy Poverty.

The Beginning
Having refused to marry at 15, she was moved by the dynamic preaching of Francis. At 18, she escaped one night from her father’s home, was met on the road by friars carrying torches, and in the poor little chapel called the Portiuncula received a rough woolen habit, exchanged her jeweled belt for a common rope with knots in it, and sacrificed the long tresses to Francis’ scissors. He placed her in a Benedictine convent which her father and uncles immediately stormed in rage. She clung to the altar of the church, threw aside her veil to show her cropped hair and remained adamant.

Sixteen days later her sister Agnes joined her. Others came. They lived a simple life of great poverty, austerity and complete seclusion from the world, according to a Rule which Francis gave them as a guide to their life. The women were initially called the “Poor Ladies,” later the “Order of San Damiano”, and by 1263, just ten years after Clare’s death, the order became known as the “Order of Saint Clare” – commonly referred to today as the Poor Clares.

The Life of the Poor Clare Nuns
The nuns went barefoot, slept on the ground, ate no meat and observed almost complete silence. Later Clare, like Francis, persuaded her sisters to moderate this rigor: “Our bodies are not made of brass.” The greatest emphasis, of course, was on gospel poverty. They possessed no property, even in common, subsisting on daily contributions. When even the pope tried to persuade her to mitigate this practice, she showed her characteristic firmness: “I need to be absolved from my sins, but I do not wish to be absolved from the obligation of following Jesus Christ.”

Contemporary accounts glow with admiration of her life in the convent of San Damiano in Assisi. She served the sick, waited on table, washed the feet of the begging nuns. She came from prayer, it was said, with her face so shining it dazzled those about her. She suffered serious illness for the last 27 years of her life. Her influence was such that popes, cardinals and bishops often came to consult her—she never left the walls of San Damiano.

Francis always remained her great friend and inspiration. She was always obedient to his will and to the great ideal of gospel life which he was making real. Clare’s theology of joyous poverty in imitation of Christ is evident in the Rule she wrote for her community and in her four letters to Agnes of Prague.

St. Clare and the Saracens
A well-known story concerns her prayer and trust. She had the Blessed Sacrament placed on the walls of the convent when it faced attack by invading Saracens. “Does it please you, O God, to deliver into the hands of these beasts the defenseless children I have nourished with your love? I beseech you, dear Lord, protect these whom I am now unable to protect.” To her sisters she said, “Don’t be afraid. Trust in Jesus.” The Saracens fled. 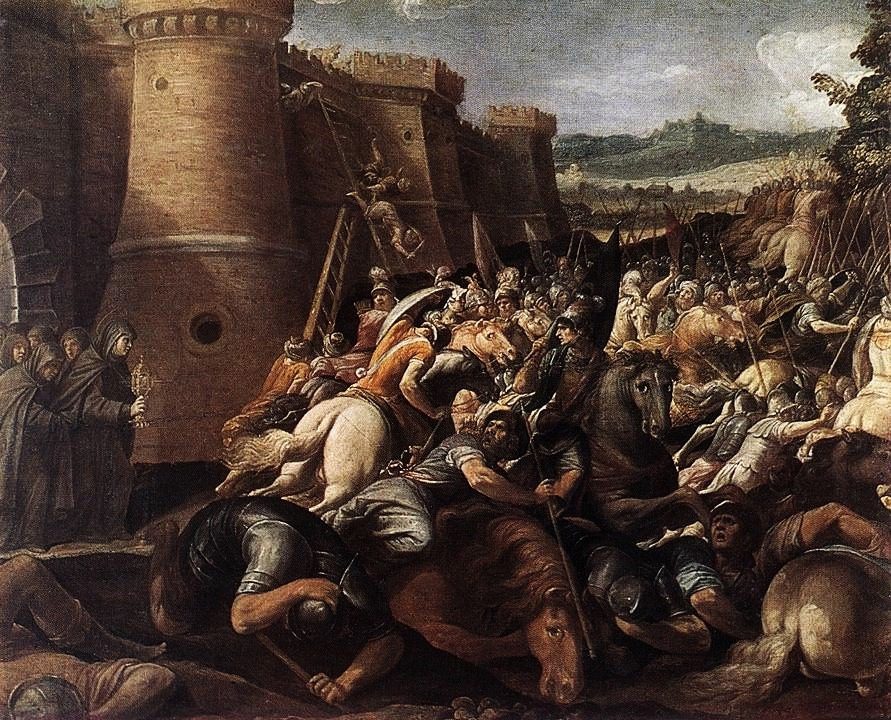 The Death of St. Clare and Canonization
On August 15, 1255, Pope Alexander IV canonized Clare as Saint Clare of Assisi. Construction of the Basilica of Saint Clare was completed in 1260, and on October 3 of that year Clare’s remains were transferred to the newly completed basilica where they were buried beneath the high altar. In further recognition of the saint, Pope Urban IV officially changed the name of the Order of Poor Ladies to the Order of Saint Clare. Some 600 years later in 1872, Saint Clare’s remains were transferred to a newly constructed shrine in the crypt of the Basilica of Saint Clare where they can still be seen today.

Did you know?
St. Clare is the patron saint of television – and many people are surprised by that. The reason is that in the later years of Clare’s life, when she was unable to arise from the sick bed and attend Mass, she was able to “view” the Mass being celebrated in a vision displayed on the wall of her small room.