About Us > Being Franciscan > Franciscan Saints > St. Joseph Cupertino 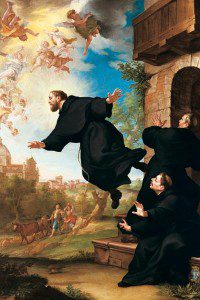 St. Joseph Cupertino
Joseph of Cupertino was a Conventual Franciscan Friar (OFM Conv.) and is recognized and honored as a Christian mystic and saint. He is the patron saint of aviation, astronauts, mental handicaps, test taking, and students.

His Life
Joseph was born in the village of Cupertino in Italy in 1603 in a none-too-auspicious beginning. Ill fortune seemed to have set its seal on Joseph before he was born. His father, a carpenter by trade, was a good enough man in his way, but he was a poor hand at dealing with money; what little he earned seemed to slip at once through his fingers. At the very moment when his son came into the world his house was in the hands of bailiffs, and his effects were being sold up. Joseph was born in a shed at the back of the house, where his mother had hid herself out of shame. With such a beginning Joseph had very poor prospects.

By all descriptions Joseph was not a good student. He was described by his early teachers as easily being the dullest child in the village. He was absent-minded, awkward, and nervous; a sudden noise, such as the ringing of a church bell, would make him drop whatever he had in his hands. If ever a child began life with nothing in his favor it was Joseph; he had only one hopeful and saving quality—that he knew it.

The family, beset by its own problems, sought any means by which to give Joseph a trade. He was apprenticed to several tradesmen.  His year as a shoemaker’s apprentice ended and he had not learned to make even simple repairs. Each trade endeavor ended with Joseph being dismissed. He was easily distracted, not always of good disposition, and was given to wandering off.

First Meeting the Friars
When he was 17, a Franciscan friar came into the village begging. His parents thought that if Joseph could not be a student or learn a trade, at least he could be a friar. His parents approached family members who were already Franciscans, but their local houses were unwilling to entertain the idea of Joseph sharing their life.  After knocking on many friary doors, Joseph was accepted by the OFM Capuchins.

The brothers found that Joseph was a true test of their patience. Not only was he very dull and difficult to teach, but his fits of piety and abstraction were troublesome. He had a way of suddenly standing still in the midst of some task and forgetting everything. He would go down on his knees in the most unlikely places, utterly oblivious of everything around him. On one occasion, while carrying food into the dining hall, he suddenly dropped everything in a great crash. In the hope of curing him, bits of the broken plates were fastened to his habit, and he carried them about, as a penance, and as a reminder of his task of service. His stay with the Capuchins ended, as had all his apprenticeships.

Round Two with the Friars
His mother was not at all pleased to have the 18-yr. old Joseph back home again, so she finally got him accepted as a simple servant at the Franciscan monastery. His primary task was working in the stables and taking care of the horses. Slowly, Joseph began to change. He grew more humble and gentle, more careful and successful at his work. He also began to practice penance. After several years of work he had impressed the local friars with his simplicity, lightheartedness, and devotions, and was admitted to the Franciscan Order, eventually being ordained a priest.

Patron of test takers
You may wonder how someone who was seemingly ungifted intellectually would be able to study and pass his tests in seminary, passing courses in philosophy, theology, liturgy, scripture, and more.  Perhaps there is a clue contained in the traditional prayer:

O Saint Joseph of Cupertino, who by your prayer, obtained from God the blessing to be asked at your examination only the questions you knew: Grant that we may, like you, succeed in the exams.

His Visions
Joseph had experienced ecstatic visions as a child. What later came to be understood as a wonderful gift of seeing God and the supernatural in all things was seen first as an oddity and burden. Now when he was a friar, and a priest besides, the visions grew stronger; it seemed easier for him to see God indwelling in His creation. Joseph could spend whole days lost in wonder and ecstatic prayer.

Patron of Aviators and Astronauts
One might also wonder how this 17th-century saint became the patron of aviation and astronauts. In the midst of some of his ecstatic moments, Joseph would rise from the ground, and move about in the air. Within a church or friary chapel he was seen to fly towards the altar or over it.  The moments were not limited to church, but occurred in the friary dining hall and even outside when suddenly he would fly into a tree. The patronage of flying things was perhaps a natural.

The Trials
But his levitation had a downside. In the 17th century, this special gift of God was also seen as being connected to witchcraft. This led some friars to denounce him. His Franciscan superiors transferred Joseph to another friary for close observation and scrutiny. As one might expect some brothers believed, some did not. The opinions were that he was a saint or a fraudulent troublemaker – there was no in between. He eventually was called to appear before the Inquisition in Naples.

The inquisitors examined him; after close testing they were unable to convict him of anything. Still they would not dismiss him; his case was at least doubtful, and they sent him for further examination to the Minister General of the Franciscan Conv. Order in Rome. Father General saw his humility; he began to doubt whether all was true that was said against him. In the end the lack of any clear consensus about Joseph lead to an agreement between the Inquisition and the Franciscans that Joseph was to be confined and kept in seclusion. And so he remained for 25 years. He died on September 18, 1663. He was just sixty years of age.