About Us > Being Franciscan > St. Francis of Assisi Series

This page is a “one-stop” locale to read the on-going bulletin series on the life of St. Francis of Assisi. The purpose of the series is to introduce the “real ” Francis to parishioners.  And perhaps you wonder why we speak of the “real” St Francis?

Did you know that statues of St Francis are the second most popular lawn/garden ornament sold every year – right behind pink flamingos. Rather like the popular icon shown above. That is an image many people have of St Francis, certainly one reinforced by Franco Zefferelli’s film Brother Sun, Sister Moon, another in a long line of romantic interpretations of the poor man from Assisi. Especially in the 20th century, Francis was portrayed as “a free spirit, a wild religious genius, a kind of medieval hippie, misunderstood and then exploited by the ‘medieval Church.’ Or perhaps they know him as the man who spoke to animals, a nature mystic, an ecologist, a pacifist, a feminist, a ‘voice for our time.’ For others he is the little plaster man in the birdbath, the most charming and nonthreatening of Catholic saints…. almost everyone has his or her own Francis” (Francis of Assisi, Augustine Thompson OP). Enjoy the series. 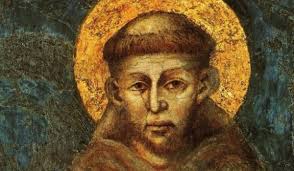 Period of Crisis: Leaving the World

Period of Crisis: Embracing the Leper

“And the Lord gave me brothers…”

The Fraternity Grows and Someone Has to Lead

An Exhortation to the Brothers

The Itinerant Life of the Brothers

The Disposal of Worldly Goods

The Conversion of Clare

A Reputation for Holiness and Miracles

The Problems of New Growth

Francis and Nature: Part I

A Sacramental View of Nature

Francis and the Eucharist

Integrating Into the Church

The Word of God

The Crusades: Part I

While He Was Away

Charism of the Founder – Vocation of the Friars

An Approved Rule of Franciscan Life

A Time of Doubt