The Feast of Saints Peter and Paul: June 29th 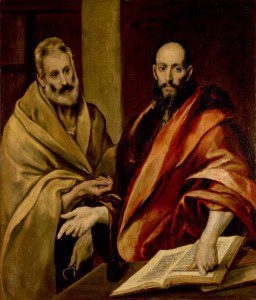 Most of the apostles and lots of saints have their own feast day, but how about the two most famous saints of the early church? There is February 22nd in which the Church celebrates the  “Chair of Peter” the sign that Peter was the first among the apostles and the one designated to lead the early Church after Jesus’ Resurrection and Ascension. The painting by Paul Rubens shows Peter with the “Keys” and wearing the pallium of the office of Bishop.

But there is no “Feast of St. Peter.”

St. Paul, although not one of the Twelve, was an Apostle commissioned by Jesus. There is the January 25th celebration of “The Conversion of St. Paul” which commemorates the Damascus Road episode described in Acts of the Apostles: 9:1-31, 22:1-22, and 26:9-24. It is the scene made famous by the “Conversion on the Way to Damascus” painting by Caravaggio.

The Roman Martyrology (the official lists of solemnities, feasts, and other liturgical celebrations of the saints and martyrs) assigns June 29th as the feast day without thereby declaring that to be the day of their deaths. St. Augustine of Hippo (late 4th century) says in his Sermon 295: “One day is assigned for the celebration of the martyrdom of the two apostles. But those two were one. Although their martyrdom occurred on different days, they were one.” Thus it is clear that the celebration is of ancient origin. There is some speculation that the date selected may be the anniversary either of their death or of the translation of their relics.