The Feast of the Holy Name of Jesus: January 3rd

We give honor to the Name of Jesus, not because we believe that there is any intrinsic power hidden in the letters composing it, but because the Name of Jesus reminds us of all the blessings we receive through our Holy Redeemer. Honoring our Savior’s name fulfills the word of St. Paul: “That in the name of Jesus every knee should bow, of those in heaven, on earth, and under the earth.” (Philippians 2:10) 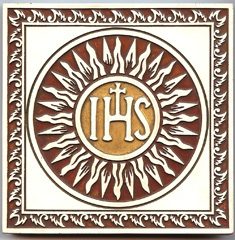 Roman Catholics observe the Feast of the Holy Name of Jesus on January 3rd each year as a formal way and appointed time to give honor to the Name of Jesus.  It is a special feast among Franciscans because of the mission and ministry of the Franciscan friar St. Bernardine of Siena (b.1380 – d.1444). When on his preaching and conversion missions to the turbulent cities of Italy, he carried with him a copy of the monogram of the Holy Name, surrounded by rays, painted on a wooden tablet. They held the symbol aloft when they blessed the sick; many great miracles were reported from these blessings – all done in the Holy Name of Jesus. At the close of his sermons, he exhibited this emblem to the faithful and asked them to prostrate themselves in adoration of the Redeemer of humanity. He recommended the faithful to have the monogram of Jesus placed over the gates of their cities and above the doors of their dwellings to remind them always of the blessings of their Lord and Savior.

The tile shown here is likely close to the symbol that St. Bernadine used (although most likely without the cross raised above the “H”). This is the most common Christogram, denoting the first three letters of the Greek name of Jesus, iota-eta-sigma, or ΙΗΣ. The Greek letter iota is represented by I, and the eta by H, while the Greek letter sigma is represented by S.

“IHS” is sometimes interpreted as meaning Iesus Hominum Salvator (“Jesus, Savior of men” in Latin) or connected with In Hoc Signo – short for In hoc signo vinces meaning, “in this sign you will conquer.” 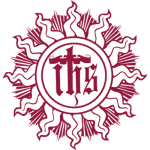 The Province of our parish’s Franciscan Friars is “Holy Name Province.”  The shield shown here is their provincial shield. 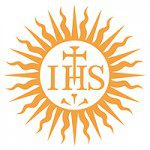 The Christogram is also of great importance to the Jesuits. The logo of their worldwide order is shown here also.