The Solemnity of the Assumption of the Blessed Virgin Mary: August 15th 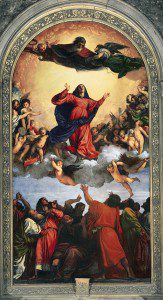 The Assumption of the Blessed Virgin Mary into Heaven is the bodily taking up of the Virgin Mary into Heaven at the end of her earthly life. This belief is part of the treasury of the Roman Catholic Church, Eastern Orthodoxy, Oriental Orthodoxy, and parts of Anglicanism. In the Eastern Orthodox churches, the Assumption is referred as the Dormition of the Theotokos (a Greek word literally meaning “God bearer”). Notice that the belief leaves open the question of Mary’s natural death.

Catholic Teaching and the Sense of the Faithful
The Catholic Church teaches as dogma that the Virgin Mary “having completed the course of her earthly life, was assumed body and soul into heavenly glory.” This doctrine was dogmatically defined by Pope Pius XII on November 1, 1950, in the Apostolic Constitution Munificentissimus Deus, while exercising papal infallibility. But Pope Pius was not declaring the belief in the Assumption as something new or novel. There is written evidence of the belief as early as the 4th century in text that covers several different languages and a fairly wide geographical dispersion. Teaching of the Assumption of Mary became widespread across the Christian world, having been celebrated liturgically as early as the 5th century in the East. It was celebrated in the West under Pope Sergius I in the 8th century and Pope Leo IV then confirmed the feast as official. Theological debate about the Assumption continued, following the Reformation, climaxing in 1950 when Pope Pius XII defined it as dogma for the Catholic Church.

Pope Pius took advantage of modern communications available in his time. He asked bishops worldwide to tell him what the people believed and practiced – the sensus fideum – the sense of the faithful. The dogmatic declaration that the Assumption was part of the “deposit of faith” for all Catholics was just the formal declaration of what the faithful already believed and practiced.

Is it Biblical?
If you mean, is the word “Assumption” or “dormition” of Mary specifically mentioned in the Bible. No. And for some people, unless the exact word is in the Bible, it can’t really be called God’s revealed truth. But the Catholic Church does not hold that Sacred Scripture is the whole of Divine Revelation.

Along with the Scriptures, the Catholic Church holds traditio, literally, “the handing on” as also Sacred and Spirit-inspired. Tradition (with a capital “T”) helps us to understand Scripture and to proclaim some of our most basic teachings. The doctrine of Mary’s Assumption is based on what is called a theological conclusion because of other indirect references to it in the Scriptures. For example, at the Annunciation (celebrated March 25th, nine months before December 25th), the Angel Gabriel declared Mary to be “full of Grace” and “God’s highly favored daughter.” (Lk 1:28) Mary conceived Jesus, the Son of God, by the power of the Holy Spirit as a consequence of accepting God’s plan for her. Further, when Mary visited her cousin Elizabeth, who herself was pregnant with John the Baptist, she addressed Mary with the words, “Who am I that the mother of my Lord should come to me?” (Lk 1:42) All these biblical statements led the Church to conclude that because of her role as Mother of the Messiah, Mary would be preserved from original sin and its consequences. Her freedom from sin was accomplished by reason of Jesus’ foreseen redemptive death on the cross. As such it would not be possible for Mary, whose womb carried the Son of God, to suffer the corruption of the body that all people experience after death.

In Munificentissimus Deus (item 39), Pope Pius XII pointed to the Book of Genesis (3:15) as scriptural support for the dogma in terms of Mary’s victory over sin and death as also reflected in 1 Corinthians 15:54: “then shall come to pass the saying that is written, Death is swallowed up in victory.” In this passage Paul alludes to Genesis 3:15 (in addition to the primary reference of Psalms 8:6), where it is prophesied that the seed of the woman will crush Satan with his feet. Since, then, Jesus arose to Heaven to fulfill this prophecy, it follows that the woman would have a similar end, since she shared this enmity with Satan.

The pope also mentioned Psalm 132, a liturgical psalm commemorating the return of the Ark of God to Jerusalem and lamenting its subsequent loss. The second half of the psalm says that the loss will be recompensed in the New Covenant, and so it is hopefully prayed, “Arise, O Lord, into thy resting place: thou and the ark, which thou hast sanctified.” (v. 8) Since the Church sees this New Covenant ark in Mary, it understands that she was taken into Heaven in the same manner as the Lord – that is, body and soul.

Finally, he mentioned in the next paragraph “that woman clothed with the sun [Revelation 12:1–2] whom John the Apostle contemplated on the Island of Patmos” as support for the doctrine.

Did Mary Actually Die?
But that brings up another point. What is death? We see it as the end of a person’s life when the body disintegrates into dust later to be resurrected at the Last Judgment. But death is also a passage from one state of life (on earth) to another state of existence (in eternity). The Church has not said whether Mary died or not. It says only that Mary made the transition from this temporal life into eternity with God. The fact that Jesus himself died on the cross would not exclude Mary’s dying, and, in fact, is an argument for some that Mary experienced death herself in imitation of her son. We just don’t know. The significant issue is that, like Jesus, her body did not suffer corruption.