The Solemnity of the Body & Blood of Christ (Corpus Christi Sunday): 60 Days After Easter 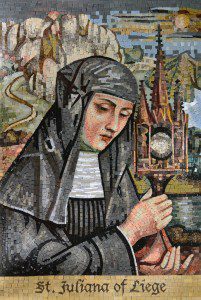 The Solemnity of Corpus Christi
Corpus Christi is Latin for the “Body of Christ.” In the Catholic Church in the West, Corpus Christi is celebrated as a solemnity on the Sunday following the Most Holy Trinity Sunday since the liturgical reforms of Vatican II. At its core the solemnity is a celebration of the Tradition and belief in the Eucharist as the Real Presence of the Body and Blood of Jesus Christ. For millennia, such a theme was part of the celebration of Holy Thursday, but then there are other important themes that are part of that celebration. And, all this occurs in the shadow of Good Friday. The placement of the celebration is not one that necessarily lends itself to a joyful celebration. But looked at from another perspective, every Sunday is a feast of the Eucharist, because by participating in the Mass, and in receiving Communion, we are honoring and celebrating the Eucharist.  Still, the Feast of Corpus Christi has its own history.

Juliana of Liège
Saint Juliana of Liège, O.Praem, (Premonstratensian Order; also known as the Norbertines) was the one who became the spark leading to a joyous celebration of Corpus Christi. For her devotion, life, and efforts, she is known as the “Apostle of the Blessed Sacrament.”

Juliana and her twin sister, Agnes, were born in a village near Liège. They were orphaned at age five and placed in a newly founded hospice at Mont-Cornillon, outside of Liège. The Norbertine canonry oversaw the care and rearing of the two girls, who were initially placed on a small farm next to the canonry. Juliana, after entering the Order at the age of 13, worked for many years in its leprosarium. Agnes seems to have died young.

Liège was already a center for devotion to the Eucharist. So from her early youth, Juliana had great veneration for the Eucharist and longed for a special feast day in its honor. In 1208 at age 16, she began having visions of a full moon having one dark spot. Her vision presented the moon in its full splendor, crossed diametrically by a dark stripe. In time she came to understand that the moon symbolized the life of the Church on earth, the opaque line, on the other hand, represented the absence of a liturgical feast in honor of Christ’s Body and Blood. Not having any way to bring about such a feast, she kept her thoughts to herself, except for sharing them with Blessed Eve of Liège, who lived in a cell adjacent to the Basilica of St. Martin, and a few other trusted sisters in her monastery. The vision was repeated for the next 20 years, but she maintained it as a secret. When she eventually relayed it to her confessor, he relayed it to the Bishop of Liège, Robert de Thorete. Eventually the celebration of Corpus Christi became part of the annual celebrations in the diocese.

Becoming a Universal Celebration
The archdeacon of the diocese, Jacques Pantaléon of Troyes was also won over to the cause of the Feast of Corpus Christi during his time in the Diocese of Liège. He eventually became Pope Urban IV in 1264. He instituted the Solemnity of Corpus Christi on the Thursday after Pentecost as a feast for the entire Latin Rite, by the papal bull Transiturus de hoc mundo.

While Juliana prepared prayers and music for the feast, Pope Urban also requested that St. Thomas Aquinas write an office (special prayers) and hymns for the feast. It is from these offices that we have the two most well known Eucharistic songs: Tantum Ergo, Pange Lingua, and O Salutaris Hostia.