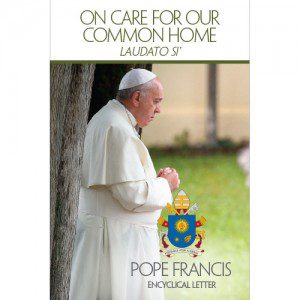 “LAUDATO SI’, mi’ Signore” – “Praise be to you, my Lord”. In the words of this beautifulcanticle, Saint Francis of Assisi reminds us that our common home is like a sister with whom we share our life and a beautiful mother who opens her arms to embrace us. “Praise be to you, my Lord, through our Sister, Mother Earth, who sustains and governs us, and who produces various fruit with colored flowers and herbs.”

Such are the opening words of the encyclical. It is an encyclical sure to intiate much dialogue and interest. This page is a source pointing you to the encyclical itself as well as supporting documents and thoughtful commentary.

Other Papal Resources
Francis is not the first pope to speak out on the environment. Previous popes and bishops have called on Christians to reflect on the connection between our care for creation and how we relate to other people, especially the poor and vulnerable, and to the Creator. Here are a few of those recent statements:

“It is not hard to see that environmental degradation is often due to the lack of far-sighted official policies or to the pursuit of myopic economic interests, which then, tragically, become a serious threat to creation.”

“The environment is God’s gift to everyone, and in our use of it we have a responsibility towards the poor, towards future generations and towards humanity as a whole.”

“Man thinks that he can make arbitrary use of the earth, subjecting it without restraint to his will, as though it did not have its own requisites and a prior God-given purpose, which man can indeed develop but must not betray.”

Peace With God The Creator, Peace With All Of Creation, World Day of Peace Message, Pope John Paul II (1990)

“The most profound and serious indication of the moral implications underlying the ecological problem is the lack of respect for life evident in many of the patterns of environmental pollution.”

“It is impossible to see what right the richer nations have to keep up their claim to increase their own material demands, if the consequence is either that others remain in misery or that the danger of destroying the very physical foundations of life on earth is precipitated.”