The Solemnity of the Epiphany: January 6th 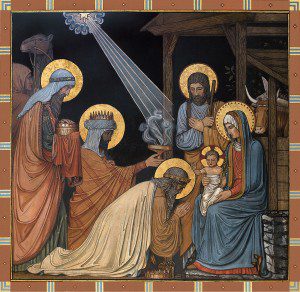 January 6th is the day we typically call “Three Kings Day,” more formally known as The Epiphany. Epiphany is derived from a Greek word ἐπιφάνεια, epiphaneia, meaning “manifestation” and refers, generally, to Jesus being manifested to the gentile visitors from the East.

But in truth it is more complicated than that/ What is striking is that there are a variety of liturgical celebrations and dates that are all part of our rich Catholic tradition surrounding “Epiphany.”

A variety of dates? So when is the Epiphany celebrated?
Well, traditionally the solemnity falls on January 6th – but that is in the western or “Latin” Catholic Church. Eastern Catholic Churches follow the Julian calendar and observe the Theophany feast (another Greek word that can be used) on January 19th. That is because of the 13-day difference today between that calendar and the Gregorian calendar used in the “west.”

OK, so here in the United States we will always celebrate it on a Sunday. But at least the meaning of the celebration is the same?
In all cases the Christian feast day celebrates the revelation of God the Son as a human being in Jesus Christ. Western Christians commemorate principally (but not solely) the visitation of the Magi to the Baby Jesus, and thus Jesus’ physical manifestation to the Gentiles. Eastern Christians commemorate the baptism of Jesus in the Jordan River, seen as his manifestation to the world as the Son of God.

“When Jesus was born in Bethlehem of Judea, … behold, magi from the east arrived in Jerusalem, saying, ‘Where is the newborn king of the Jews? We saw his star at its rising and have come to do him homage.’ …. And behold, the star that they had seen at its rising preceded them, until it came and stopped over the place where the child was. They were overjoyed at seeing the star, and on entering the house they saw the child with Mary his mother. They prostrated themselves and did him homage. Then they opened their treasures and offered him gifts of gold, frankincense, and myrrh.”

As it happens, Magi are not kings – they were astrologers and possibly Zoroastrian priests. The identification of the Magi as kings is linked to Old Testament prophesies that have the Messiah being worshipped by kings in Isaiah 60:3, Psalm 72:10, and Psalm 68:29. Early readers reinterpreted Matthew in light of these prophecies and elevated the Magi to kings. By AD 500 all commentators adopted the prevalent tradition that the three were kings.

And the text never says there are three – we just infer that from the number of gifts. But in any case, we are celebrating the visit of the first Gentile worshippers of the Savior. No worries – we will still sing “We Three Kings” in the Sunday celebration.

At least we know the names of the Magi.
In the Western Christian church they have been commonly known as:
– Melchior (also Melichior), a Persian scholar
– Caspar (also Gaspar, Jaspar, Jaspas, Gathaspa, and other variations), an Ethiopian scholar
– Balthazar (also Balthasar, Balthassar, and Bithisarea), an Arabian scholar.

But those names are only used in the West. In contrast, the Syrian Christians name the Magi Larvandad, Gushnasaph, and Hormisdas.

After they visited Jesus, the Gospel says that they returned home by another way so as to avoid King Herod. Do we know what happened to them?
In short no, but there are many traditional stories about what happened to the Magi. In one account, one of the Magi is baptized by St. Thomas on his way to India. Another has all their remains found by St. Helena and brought to Constantinople, and eventually making their way to Germany and the Shrine of the Three Kings at Cologne Cathedral.

How about the three gifts? Anything interesting there?
Three gifts are explicitly identified in Matthew: gold, frankincense, and myrrh. Many different theories of the meaning and symbolism of the gifts have been brought forward. While gold is fairly obviously explained, frankincense, and particularly myrrh, are much more obscure. The theories generally break down into two groups:
– All three gifts are ordinary offerings and gifts given to a king. Myrrh being commonly used as an anointing oil, frankincense as a perfume, and gold as a valuable.
– The three gifts had a spiritual meaning: gold as a symbol of kingship on earth, frankincense (an incense) as a symbol of deity, and myrrh (an embalming oil) as a symbol of death.