The Catholic Church sets aside certain days and seasons of each “year” to recall and celebrate various events in the life of Christ. Our “liturgical year” does not correspond to the calendar, but rather begins with the Season of Advent – as seen in the graphic. As we move through the liturgical year, each celebration of Mass is accompanied by readings from the Old Testament, New Testament, and the Gospels. 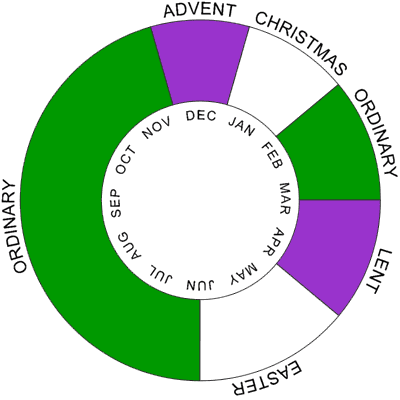 The Gospels are organized into a three-year cycle, designated A, B, or C. Year B follows year A, year C follows year B, then back again to A.

The Gospel of John is read throughout Easter, and is used for other liturgical seasons including Advent, Christmas, and Lent where appropriate.

Season of Advent
Advent is a time of watchful, joyful, and hopeful preparation for the Coming of the Lord, both the “first coming” of Jesus (Christmas) and his “second coming” (Parousia).

Season of Christmas
The Season of Christmas celebrates the Incarnation/Nativity/Birth of Jesus Christ. Not just Christmas Day itself, but a season of continued celebration for several weeks afterward. The exact length of the Christmas Season varies from year to year.

Season of Ordinary Time – I (begins)
This liturgical season can also be called “Ordered Time” or the “Season of the Year” (when Sundays are sequentially numbered).

Season of Lent
A season of preparation for Easter, Lent has both a penitential and baptismal character. Traditional penitential practices during Lent include fasting, prayer, and almsgiving. For those preparing to be baptized at Easter, the “Rite of Christian Initiation of Adults” (R.C.I.A.) includes a “Rite of Election” (usually done early in Lent) and three “Scrutinies” (done on the 3rd, 4th, and 5th Sundays of Lent).

Season of Easter
The Season of Easter celebrates the “Paschal Mystery:” the Death & Resurrection of Jesus Christ (the core/central event of Christianity).

Liturgical Colors: The changing of the liturgical season is also accompanied by a change in the colors used for altar linens and the vestments of the celebrating priests and deacons.