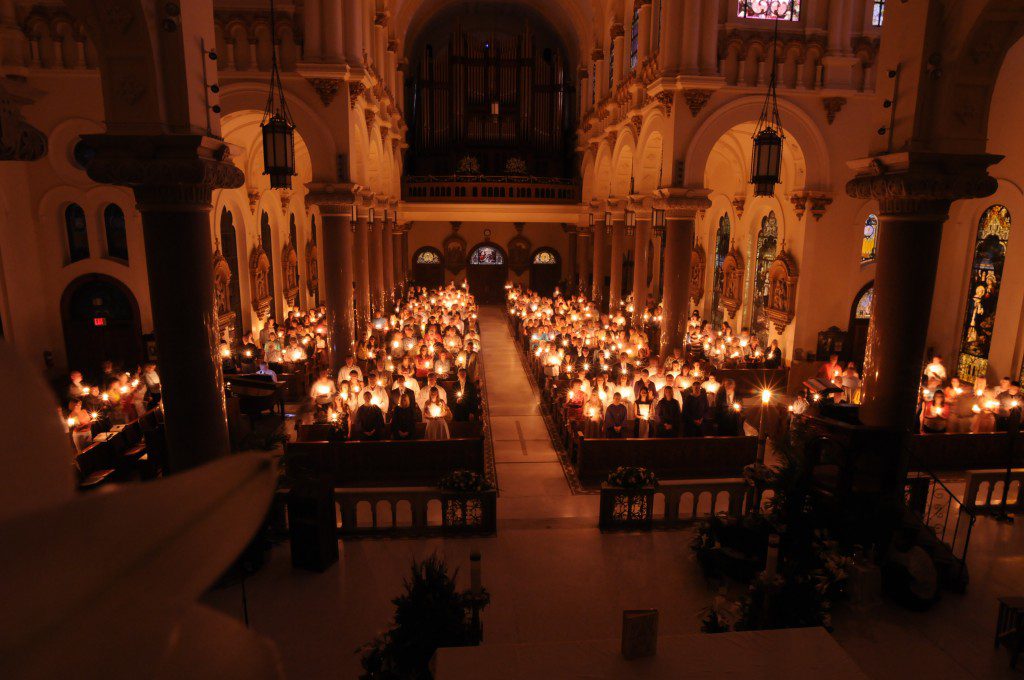 This Easter Vigil, the “homily” is presented in a different way. We chose to have an introduction before each Old Testament Reading that began to thematically weave together the homily message and then conclude during the homily proper. The picture above is our church during the procession of light. A reminder of the richness of the Vigil liturgy.

The Easter Vigil readings used can be found here.

“Let there be Light” The very first act of creation arising from the Spirit hovering over the abyss of darkness. Echoed in the act of new creation when the Light of the World will emerge from the darkness of the tomb. Echoed in the words of Ps 104: “Lord, send out your spirit and renew the face of the earth.”

In this first reading you will hear the story of beginning of Covenant as God creates a place for us to live and call home. God will supply with all manner of life and vegetation, all of it called “Good”. On the sixth day human life emerged from the power of God. And God created us and “he found it very good.” Of all that was created, we are the one called “very good.”

We were created to be, destined to be a people sealed in covenant with God.

And with His covenant people secure in a world with all needed for life, on the 7th day God rested.

Since the time of the first reading the Covenant people of God did not fare so well. A covenant is a two-way set of promises, of pledges. “I will be your God” and to that we promise to be his people. But the story of covenant history told in the first chapter of Genesis through Genesis 12, is a story of failure on our part, failure to fulfill our pledge. The familiar line is “God didn’t create everything. Sin was our creation.”

Between Creation and the time of Abraham and Sarah, is a time when we invented new ways to sin. Cain killed Abel. Sin proliferated so widely that God started over, saving Noah and his family as the seedbed of a new creation, a family in which to carry out the covenant promises. God washed the world clean of sin in the waters of the Flood. Just as the waters of Baptism wash away the stain of original sin.

Even though we broke the covenant, God did not abandon us. He renewed the Covenant, promising to never again wash clean the earth. He renewed again the promise made to Adam and Eve as they were expelled from the Garden. In Genesis 3:15 God promised there would come one who would conquer sin and death, knowing that to fulfill that pledge, the One would be required to hold nothing back, not even life itself.

And the question asked in this second reading, is what do we hold back? What is more precious to us than God and promises of God?

Abraham held back nothing, willing to sacrifice his only Son – at the same time doing the one thing God had asked of him, “Have faith.”  Abraham’s faith was sorely tested but God was true to his covenant. In the end not asking that Abraham’s only son he sacrificed. Knowing that He would offer up his only begotten Son, the spotless lamb of atonement.

The word “redeemed” is technically, the price to free a slave, to redeem the person from slavery. Redemption is ever part of the covenant promise. We will see that in this third reading when God redeems the people of Israel from slavery to Pharaoh, foreshadowing God’s redemption of all people through the Wood of the Cross.  Redeems Israel that they may journey to the promised land, foreshadowing our redemption that we may journey to Kingdom of God, our promised land.

The people of Israel reached the promised land eventually. The 40 years of Exodus are a story of human rebellion, covenants made and broken, sin and redemption, and cries for help and responses of rescue. It is a repeating story in every age that followed: the time of the Judges of Israel as well as the time of the Kings of Judah and Israel. In every age God called the people back to their promises, back to the covenant. The Word of God was spoken through the voice of the prophets – Elijah, Hosea, Jeremiah and others. None more powerful than the prophet Isaiah. In our next reading we hear Isaiah speak to the people of Israel in exile in Babylon.

The sins of the people became too much and for a time, the promised land, still promised, was lost to them. The Babylonian Exile was for that generation a new Exodus, 40 year not of wandering, but of wondering. Asking themselves “where is God in all this is?”  God answers through the words of Isaiah, reminding them that, in the end, God never fails in his promise of the covenant. While Isaiah describes the divine punishment for sin, he also reminds them the people God is faithful even as He is just.

Again, we hear the words of the prophet Isaiah: “I will renew with you the everlasting covenant…” “Seek the Lord while he may be found, call him while he is near…”  “My word shall not return to me void, but shall do my will, achieving the end for which I sent it.”  Word to the people in Exile, but words for our time. Word that let us know we are not alone. The promise holds true if only we will seek the Lord for his Word is powerful and will achieve the purpose for which it was sent.

This reading is also to the people of Israel during the Babylonian era. It comes from one of the wisdom writings in the Old Testament. It is attributed to an assistant to the prophet Jeremiah. If Isaiah holds up the continuity and promise of the Covenant, Baruch cautions them that a covenant goes both ways. The track record of the people is not good. While we are quick to call out for redemption and rescue, we are as quick to backslide and return to sinful ways. Baruch asks, “How is it, Israel that you are in the land of your foes?”…”  Baruch answers the question: “You have forsaken the fountain of wisdom.”

It is a cautionary tale, not to just call out to God, but to seek the wisdom to know God and to know what pleases Him – lest this cycle continue.

In this last of the Old Testament reading this evening, we hear from the Prophet Ezekiel also speaking to the people in Exile. He will describe the people as one who defiled the promises, ran after other idols and became other than a light to the world of the goodness of God. Ezekiel will describe the fury of God that they have earned. And yet… the covenant promise remains in place… and more than a land and generations of descendants, God promises to give us a new heart and a new spirit.  God is all in, going beyond the covenant promises. The response to each transgression is the renewal and improvement of the covenant. God is “all in.”

In the dark and silence of this night, we heard the story of God’s total commitment to his covenant, his promise to always be our God… whether we are his people or not. God is and is always, “all in.” Holding nothing back. Not even his only begotten Son.

On the 7th day of Creation God rested and during the time since Good Friday, the  living Word of God laid still in the sleep of death while heaven and earth were silent around him waiting. But the tomb has been revealed as the womb of Light, Life, and New Creation.

And here at Easter the story of Creation is told anew:

We know that the women discovered on Easter morning. The tomb is empty, the womb has given forth new life into the world.  The covenant renewed. The covenant awaiting your acceptance of this newness of life.

“Or are you unaware that we who were baptized into Christ Jesus were baptized into his death? We were indeed buried with him through baptism into death, so that, just as Christ was raised from the dead by the glory of the Father, we too might live in newness of life.” (Romans 6:3-4)

May we be people of the covenant: cleansed in Baptism. Walking in wisdom. Steeped in the lessons of the Word of God. Ready to emerge from the tombs of our quarantine to be a source of new light and life in the world. Disciples of Christ, not afraid.

The covenant people we were always called to be. For we have been redeemed for this purpose, for this we were born to new life.

Christ is risen. Let us always and ever proclaim, Alleluia!