Easter Triduum is a term used by the Roman Catholic Church to denote the three days from the evening of Holy Thursday to the evening of Easter Sunday. The Triduum begins with the evening Mass of the Lord’s Supper and ends after evening prayers at sunset on Easter Day.

The term was used at the Second Vatican Council, when the revised liturgical calendar set the final part of Holy Week apart from Lent proper. Previously, these three days had already gained distinction from the rest of Holy Week with an observance of silence, which were also known as “the still days.” During Mass, music was not to be played and all church bells were silenced. People were also encouraged to observe silence in their homes during this time. 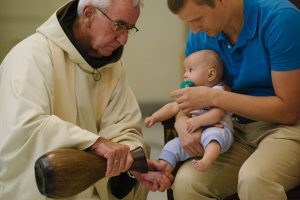 Holy Thursday
The first celebration of the Triduum is the evening Mass of the Lord’s Supper. This Mass celebrates the last meal Jesus shared with his Twelve Apostles and disciples before his death. (cf. Paul the Apostle recounted in 1 Corinthians 11:23–26, as well as the synoptic Gospel accounts of Matthew, Mark and Luke)

After the homily on Holy Thursday, we imitate our master in the washing of feet. This ritual reminds us that our baptismal commitment means we are to be servants of one another. In the time of St. Ambrose in Milan, those who were baptized also had their feet washed, because of Jesus’ words to Peter: “Whoever has bathed has no need except to have his feet washed” (Jn 13:10). Many scholars have seen a baptismal reference in those words.

Per se, the Mass does not end. There is no dismissal or final blessing. The evening’s celebration concludes with a “stripping of the altar” in which not only are all decorations removed, the Blessed Sacrament is taken from the tabernacle on the main altar and processed to an altar of repose outside the main body of the church. The sanctuary candle or paschal candle is extinguished or darkened, and not relit until the Easter Vigil. Eucharistic Adoration is common after the Holy Thursday Mass and continuing until midnight. It is reminiscent of waiting with Jesus in the Garden of Gethsemane. 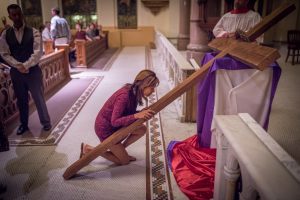 Good Friday
On this day, Christians ritually recall the Passion and crucifixion of Jesus. Mass is not celebrated on this day, however, Holy Communion (reserved in the tabernacle on the altar of repose from the previous evening) is distributed at the Celebration of the Lord’s Passion. The celebration traditionally occurs at 3 pm and consists of three parts: liturgy of the Word, veneration of the cross, and Holy Communion.

The first part, the Liturgy of the Word, consists of the reading or chanting of Isaiah 52:13-53:12, Hebrews 4:14-16, 5:7-9, and the Passion account from the Gospel of John. The second part of the Good Friday liturgy is the Veneration of the Cross: a cross is solemnly displayed to the congregation and then venerated by them, individually if possible. The third and last part is Holy Communion. The Eucharist, consecrated at the Mass of Holy Thursday is distributed at this service. At the conclusion, the priest and people depart in silence, and the altar cloth is removed, leaving the altar bare. 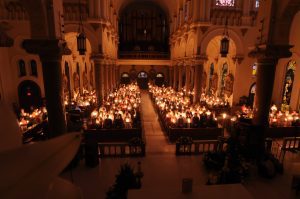 Holy Saturday
Following Good Friday, Holy Saturday is a commemoration of the day that Jesus lay in his tomb. In the Roman Catholic Church, daytime Masses are never offered. It is a time of waiting.

Easter Vigil (Saturday after sunset)
Held after nightfall of Holy Saturday, or before dawn on Easter Day, in anticipation of the celebration of the resurrection of Jesus.

The Service of Light
The Vigil service begins outside the church around a large fire. This new fire symbolizes the radiance of the Risen Christ dispelling the darkness of sin and death. The Paschal candle is blessed and then lit. This Paschal candle will be used throughout the season of Easter, remaining in the sanctuary of the church or near the lectern, and throughout the coming year at baptisms and funerals, reminding all, that Christ is “light and life.”

Once the candle has been lit there follows the ancient and dramatic rite of the Lucernarium, in which the candle is carried by a priest through the nave of the darkened church, stopping three times to chant an acclamation such as ‘Christ our Light’ to which the assembly responds ‘Thanks be to God.’ As the candle proceeds through the church, the baptized light their candles from the flame of the Paschal candle. As this symbolic “Light of Christ” spreads throughout those gathered, the darkness is dispersed. Once the procession has reached the sanctuary of the altar, with the church lit only by candle light, the Exultet (Easter Proclamation) is intoned.

The Liturgy of the Word
The Liturgy of the Word consists of seven readings from the Old Testament, although it is permitted to reduce this number for pastoral reasons (if reduced, it is customary to use readings 1, 3, 5 and 7). Each reading is followed by a psalm and a prayer relating what has been read in the Old Testament to the Mystery of Christ. After these readings conclude, the Gloria is sung for the first time since before Lent (with the exception of Holy Thursday, which is the only time it is heard during the 40 days of Lent), and the church bells and the organ, silent since that point on Holy Thursday, are sounded again – The opening collect (prayer) is read. A reading from the Epistle to the Romans is proclaimed, followed by the chanting of Psalm 118. The Alleluia is sung for the first time since the beginning of Lent. The Gospel of the Resurrection is proclaimed.

The Rite of Christian Initiation
People desiring to full initiation in the Church who have completed their formation are formally initiated as members of the faith the Church through the Sacraments of Initiation (Baptism, Confirmation, and the Holy Eucharist; the latter is celebrated during the Liturgy of the Eucharist). The Initiation celebration consists of the Baptismal Liturgy (litany of the saints, blessing of the baptismal waters, Baptism celebration, and Confirmation celebration, and a renewal of Baptismal vows of all present.

The Easter Vigil then concludes with a Liturgy of the Eucharist.