Our Liturgy & Music ministries provide an excellent opportunity for you to utilize your talents and gifts in service to one another and the larger parish community. And one such ministry that falls within this category is our Altar Servers.

The primary role of an Altar Server is to assist the priest in the celebration of the Mass, but they also fulfill many roles during the liturgy, including carrying the processional cross and candles, holding the missal for the celebrant as needed, assisting the priest as he receives the offertory gifts, washing the hands of the priest before the prayer over the gifts, carrying the incense and thurible, and removing items from the altar during communion.

The server is the priest’s right-hand helper. When they serve the priests, they serve the people of God, and above all, they serve Christ. Doc Dougherty, the ministry lead, has a unique perspective of the Altar Server Ministry; not only is he the leader, but also the proud parent of five Sacred Heart altar servers. We recently reached out to the Dougherty family about their experiences with the Altar Server Ministry… 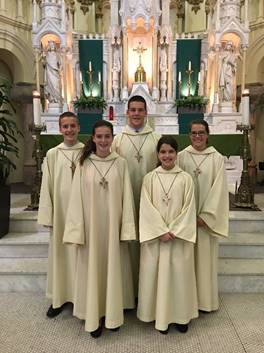 “Our children absolutely love serving at Mass,” said Doc Dougherty. Doc and his wife, Alexandrea, are the parents of Alexis 18, Micayla 16, Colton 15, Carter 13, and 12-year old Larissa. After serving for several years at Sacred Heart’s “sister church” of the same architect, St. Joseph Catholic Church in Macon, Ga., the Dougherty’s were excited to become a part of Sacred Heart Church, whose interior looks similar to the church they served for five years. Alexandrea Dougherty said, “Our children are more engaged in the Mass than when they are sitting in the pews.” Micayla Dougherty agreed by adding, “When I am not serving, I truly feel like I am missing out on something.” Servers perform their duties in a sincere and reverent manner. Attentiveness to the words and actions of the Mass will ensure that the liturgy unfolds in a smooth and prayerful manner for all. Of utmost importance, however, is not really the things they do, but the example they give. “As an altar server, I have been able to grow as a person being responsible for assisting in the Mass,” said Alexis Dougherty. “I remember not wanting to be an altar server when I was first asked to do it, but now I can’t imagine not being a server!” “We have seen all of our children show great leadership skills by altar serving,” added Doc. “Our children are the first ones to the van in the morning, always wanting to get to Mass really early, as well as serve every holiday.” The simple requirements necessary to be an altar server include: be a registered member of Sacred Heart Parish, regularly receive communion, and have completed at least 4th grade. Doc ended by saying, “It is a lot easier to develop a Catholic foundation when a child is young than when they are older, and serving at the altar is no doubt an experience and honor that will last a lifetime.”