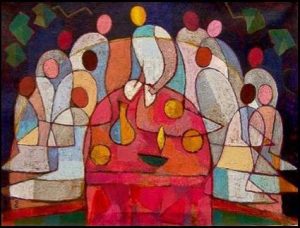 When the English historian Christopher Dawson decided to become a Roman Catholic, his aristocratic mother was distraught, not because of Catholic teaching, but because now her son would, in her words, have to “worship with the help.” His background would no longer set him apart from others or above anyone. At church he would be just an equal among equals because the Eucharist would strip him of his higher social status. It was this very thing that first drew Dorothy Day to Christianity. During the Eucharist, she noticed the rich and the poor knelt side by side; all humbled before the great gift of Christ. Around the Eucharistic table what Mary prophesized in her Magnificat came to be, that, in Jesus, the mighty would be brought down and that lowly would be raised up. END_OF_DOCUMENT_TOKEN_TO_BE_REPLACED