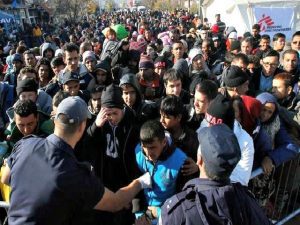 In flurry of activity, President Trump issued an executive order entitled “Protecting the Nation From Foreign Terrorist Entry Into the United States” (you can read the full text here). The key points of the Executive Order are:

The Franciscan OFM friars of the United States have issued a joint Franciscan Statement on the Immigration Ban:

The recent actions of President Donald J. Trump regarding the treatment of immigrants and refugees entering our country have been troubling to a wide-ranging group of citizens across the United States. As Franciscans, we are morally outraged by and resolutely denounce the January 27, 2017 Executive Order addressing the US immigrant and refugee admission program.

While the action’s stated intention is to protect the U.S. from terrorism, it is ill conceived and counter to our country’s founding principles. Furthermore, whether intended or not, it is perceived as targeting Muslims and as suggesting that all Islamic immigrants and refugees are suspect.  This is an affront to the human dignity of our refugee sisters and brothers fleeing persecution and war, and the many immigrants who hope for a better life on our shores. We believe that the order as written and implemented sows division and animosity, making the solidarity that leads to security less possible.

We feel compelled to add our support to the many voices from various sectors of our society who also have denounced this Executive Order: refugees and migrants themselves, business leaders, civic and political leaders, public personalities, and religious leaders including many US Catholic Bishops.

Some of our ministries have been fortunate to welcome refugees into their communities, working with Church organizations contracted by the US government after the lengthy (usually two to four years) vetting process already in place.   Still other ministries have been places of welcome for immigrants, carrying out the Biblical mandate to “welcome the stranger.”

Pope Francis, during his 2015 visit to the U.S., reminded Americans of the importance of our own identity as immigrants. He said, “As the son of an immigrant family, I am happy to be a guest in this country, which was largely built by such families.” Our country, at its best, has cherished and embodied this decree to “welcome the stranger” by proudly embracing its identity as a nation of immigrants.

Considering this heritage and in solidarity with our immigrant and refugee brothers and sisters, we Franciscans commit ourselves to:

We pray that God’s wisdom will prevail and will lead all of us to seek the Common Good.

Franciscan Friars (OFM) of the United States of America

A summary of the Executive Orders