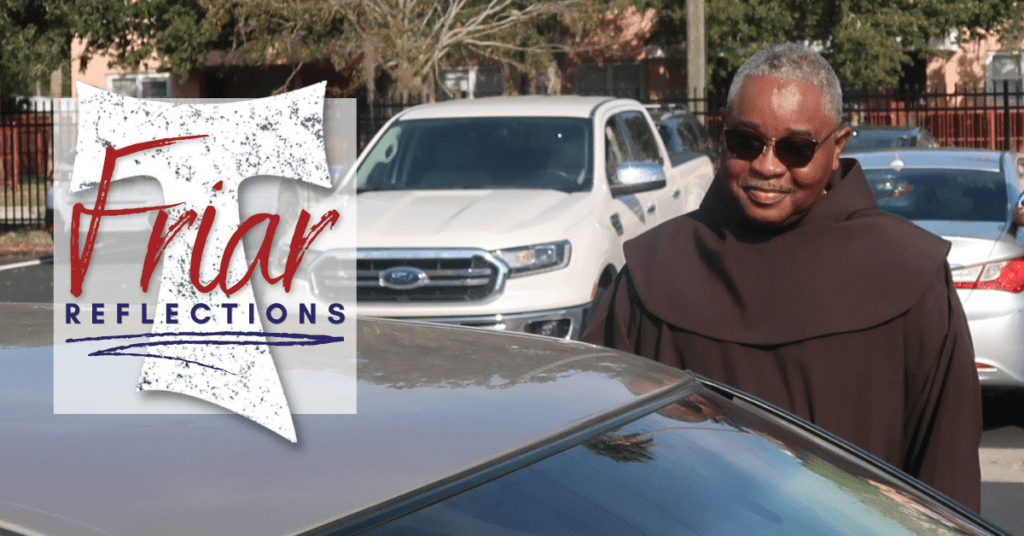 (Editors Note: Embarking on a new tradition in 2022, the friars of Sacred Heart will alternate penning a letter or discussion aimed to help parishioners engage with the readings, the parish, or their outreach initiatives on a weekly basis. This new practice continues with a letter from Friar Henry Fulmer discussing the Franciscan Charism.)

For this week’s reflection, I would like to pose and answer a pair of questions: who and what are Franciscans? Many of you will have an idea on the logistics. After all, our religious order has been part of Sacred Heart for more than a decade and a half. But what about the spirituality?

For those who have wondered and maybe not known how to find the answer, or those who are new to our parish, and haven’t experienced a parish run by a religious order, I’m here to help. A Franciscan’s spirituality is both contemplation and action, in several phases. St. Francis lived the gospel of compassion, care of creation and being in solidarity with the poor. The Franciscan’s view of God and God’s action are different considering other religious orders emphases on sin.

The Franciscan charism is about the ways that God’s creation is good and that the life we are given is to be celebrated joyfully. The Franciscan desire on the goodness of God and all creation has consequences. We must take care of what has been given to us from God. God’s very creation is the outpouring of God’s love for us. Therefore, Franciscans speak about all of God’s creation as “the mirror of God.” This is revealed to us also in the creation story in Genesis, Chapter 1. This faith in God has implications in the Incarnation and Salvation.

The Franciscan consciousness honors the world around us and is united in praising God from their experiences. The world isn’t divided into that which is profane and that which is holy. Franciscans, as one of the four great mendicant orders of the Church, strive to cultivate the ideals of poverty, charity, and experience, as those ideals assist in our ability to minister to all. Franciscans do not believe in living lavishly while other Christians live in poverty and misery. To truly live the core Franciscan values is to be of service, respect, compassion, peace, hope, joy, integrity, and vision.

The Franciscan charism moves us away from dividing up our world into that which is good and bad, or as Sr. Ilia Delio says “is always capable of identifying God’s absence, but rarely consistent in affirming God’s presence in everything that is.” The Charism of the Franciscans through Francis’ eyes was to see God’s presence in everything as interconnected; the moon, the water, and the birds as his sisters, and the sun and wolf as his brothers.

In the drop down menus below, you’ll find some answers to the most frequently asked Franciscan questions:

What is a Franciscan Friar?

A Franciscan friar is a member of a religious order called the Order of Friars Minor, founded by St. Francis of Assisi more than 800 years ago. Men, who take the vows of poverty, chastity, and obedience, seek to follow the manner of life that St. Francis led. Our order is a mendicant religious order of men who depend directly on the charity of the people for their livelihood. At the present time, the Franciscan Friars number 17,224 worldwide with 586 novices or “friars in training.” Oftentimes you will read OFM after a Friar’s name, wondering what it means. It refers to the Order of Friars Minor, commonly called the Franciscans.

Are friars members of the diocese, or something else?

Our friars are members of the Franciscan Friars of Holy Name Province. While our parish is a member of the diocese, the friars largely answer to the provincial. As mentioned by Bishop Parkes during his homily from Fr. Mike’s installation Mass last weekend, a Franciscan province is a geographic area of the country where the Friars of that province live and work. The Franciscan Order divides countries into provinces. Holy Name Province is the largest of the seven provinces in the United States belonging to the Franciscan Order. It covers the eastern seaboard with some locations beyond, so their coverage is a bit bigger than the five counties that make up the Diocese of St. Petersburg. Our provincial headquarters are in New York.

Is there a difference between friars, brothers, and priests?

“Friar” is the English language version of “frater,” Latin for brother. All Franciscan men are Brothers by reason of the vows we take to live our life in community as a fraternity of men dedicated to following Christ in the manner of St. Francis. Within our own fraternal life, “Brother” is the moniker used. All the brothers also are called to their own vocation. Many of these same men also are priests. The men of Holy Name Province who were called to the vocation of ordained priesthood and serve in pastoral settings, such as parishes and retreat centers, also can be called “Father.” So, a Franciscan can always be called “Brother:,” and “Father,” if they are ordained.