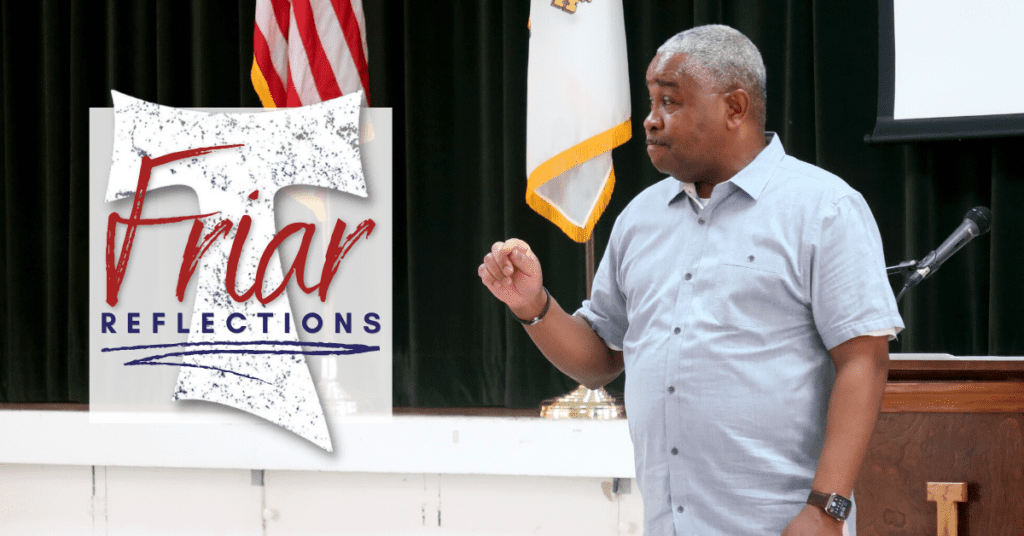 While my brothers use this space as an opportunity to connect with you through the Gospel or liturgical events, I wish to continue with an educational stream of information on who we are as Franciscans, and what makes us tick. As parishioners, you are likely aware of the Franciscan Charism and differences in lifestyle and approach to the religious life when compared with other orders or with diocesan priests. After all, our order has been with you at this parish since 2005, so osmosis may have set in. Taking the time to help define the way in which we are structured, and provide context for how and why we live in the way we do seems important to reestablish periodically, regardless if you are a recent registrant or come from a multi-generational family of parishioners. For instance, were you aware that  there are multiple orders of Franciscans? Do you know the extent of our commitment to the vows we take? I am happy to answer questions like these to make certain our parishioners feel a stronger connection to their friars. Additionally, changes to our structure can occur, and it is imperative for us as a fraternity to inform you.

The Franciscans consist of three orders. The First Order (no, not the bad guys in the recent Star Wars films) comprises priests and lay brothers who have sworn to lead a life of prayer, preaching, and penance. This First Order is divided into three independent branches: the Friars Minor (O.F.M.), the Friars Minor Conventual (O.F.M. Conv.), and the Friars Minor Capuchin (O.F.M. Cap.). The Second Order consists of cloistered nuns who belong to the Order of St. Clare (O.S.C.) and are known as Poor Clare’s (P.C.). The Third Order consists of religious and lay men and women who try to emulate St. Francis’s spirit by performing works of teaching, charity, and social service. Strictly speaking, the latter order consists of the Third Order Secular, whose lay members live in the world without vows; and the Third Order Regular, whose members live in religious communities under vows.

Historically, the friars wandered and preached among the people, helping the poor and the sick. They supported themselves by working and by begging for food, but they were forbidden to accept money either as payment for work or as alms. The Franciscans worked at first in Umbria and then in the rest of Italy and abroad. The impact of these street preachers and especially of their founder was immense, so that within 10 years they numbered 5,000.

During the first years of the Franciscans, the example of Francis provided their real rule of life, but, as the order grew, it became clear that a revised rule was necessary. After preparing a rule in 1221 that was found to be too strict, Francis, with the help of several legal scholars, unwillingly composed the more restrained final rule in 1223. This rule was approved by Pope Honorius III.

Even before the death of Francis in 1226, conflicts developed within the order over the observance of the vow of complete poverty. The rapid expansion of the order’s membership had created a need for settled monastic houses, but it was impossible to justify these if Francis’s rule of complete poverty was followed strictly. Three parties gradually appeared: the Zealots, who insisted on a literal observance of the primitive rule of poverty affecting communal as well as personal poverty; the Laxists, who favored many mitigations; and the Moderates, or the community, who wanted a legal structure that would permit some form of communal possessions.

Here in the United States, there are seven provinces of Franciscan Friars which span from coast to coast. As it was in St. Francis’ time, so it is now that the friars will undergo changes. Six out of the seven provinces could merge and become one province, which could span the majority of the country. Theses changes will cause us as Franciscans to once again “Begin again.” The saying of beginning again was ascribed to Francis, when he said to the brothers, “up until now we have done nothing, let us begin again.” As friars, we are challenged to ongoing conversion, both in our lives and in ministry and community.

The friars first call is to fraternity, which entails his call to prayer and communal life. In this way, the friar is called to brotherhood, living out the gospel message with his brothers daily in both prayer and common meals. We value this time of community with each other as a time to recharge and engage in the life-giving support of our brotherhood as consecrated religious. Just as families enjoy their times of gatherings on certain holidays and special occasions, this part of common life is very important to us as friars, for our health and well being with each other, and to relax outside of ministry. It is from this common life that we as brothers are called to go forth in mission, to our ministries (parishes, schools, hospital, and soup kitchens) and serve the people of God. This is our DNA, simply put. This is what sets Franciscans apart from other religious communities, that need for fraternity.

It is in living out our vows of poverty, chastity, and obedience that we give witness to the kingdom of God. Just as Jesus tells his disciples, “go out two by two and take nothing for the journey,” we friars must give witness to this by the way we live our lives in community and ministry. We friars must be countercultural in the way we live, breath and interact with all creation. As friars, we are to listen and be challenged by those we live (friars) and work with (staff) and those we encounter in our daily lives through ministry or service. Within the Franciscan order, fraternity remains the nucleus in which we live out our Franciscan life and values as friars.