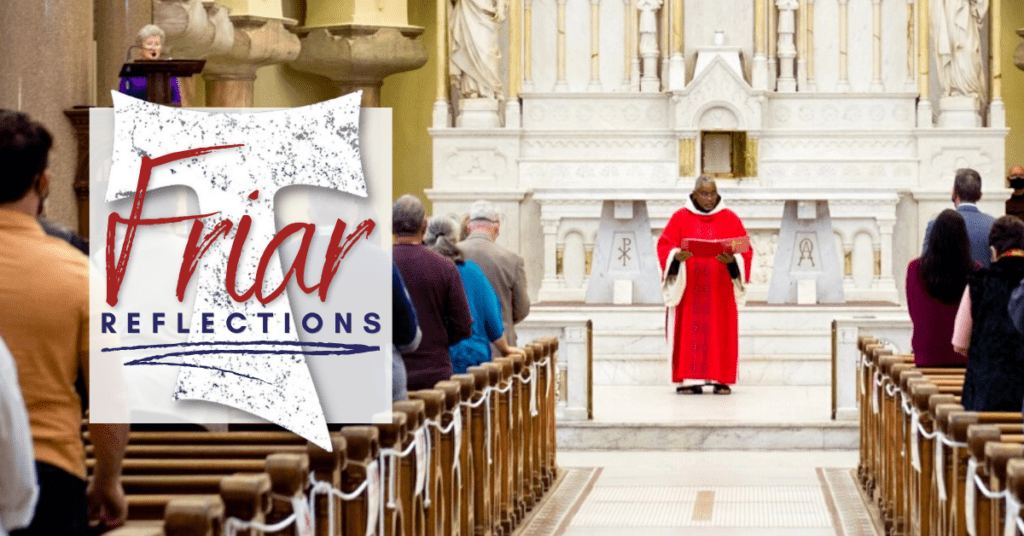 I have been writing in these reflections about who and what we are as Franciscans, and on this most central and pivotal of weekends in our liturgical year, I wish to speak about the history of my brother Franciscans in the Holy Land, the area where the events central to our faith took place.

You may be surprised to learn the holy sites that people travel from all around the globe to see in Jerusalem are run by friars, specifically the Franciscan Friars of the Holy Land, or the Custody of the Holy Land. These brothers were given the obligation of maintaining and ministering at these holy sites in 1342, by a papal decree, known as a “bull,” from Clement VI.

St. Francis of Assisi went to the Middle East at the beginning of the 13th century to visit and touch the places that offered an irreplaceable testimony of God’s revelations and love for the human person. During Francis’ journey, and despite the ongoing crusades, Francis encountered and dialogued with the Egyptian sultan Malik Al-Kamil, who was governing the Holy Land at that time. It was a peaceful encounter, which started the beginning of the Franciscans’ presence in the Holy Land and influenced the way in which the order has been present to this day.

The friars act as “guardians” of the important Christian sites in the region, preserving the value and experiences of these historical places, which ultimately aides pilgrims seeking to connect with that history.

The friars consistently tell of the miracles, manifestations, and footprints of the passage of God in this world. They echo the words of the Lord, who spoke to them through the prophets and apostles and became “flesh,” a man like us, living in our midst. This is what is meant when popes say that the friars’ mission is to work so that the biblical places become centers of spirituality, each as a sanctuary, preserving and handing on the evangelical message while nurturing the piety of the faithful.

The friars continue to fulfill their mandate of caring for the sacred shrines today. The following is a partial list of the shrines for which the Franciscans serve as caretakers:

The group of friars who have dedicated their life to serving and preserving these sacred places so important to our faith is known as The Custody of the Holy Land (Custodia Terræ
Sanctæ). The Custody is symbolized by the Cross of the Holy Land, a red, Greek cross on a white background that features four smaller crosses, also known as the Jerusalem Cross. The Custody can be traced back to the year 1217, when the first general chapter of the Friars Minor was celebrated at St. Mary of the Angels, near Assisi. In an act of inspiration, Francis decided to send his friars to all nations.

Francis and the order divided their numbers into “provinces,” and left from Assisi out to the four corners of the world. The Holy Land was listed as the most important province for this new mission. The province was entrusted to the care of brother Elias of Cortona, who, while not a cleric and never a priest, was a lay brother with significant organizational skills, which would have been advantageous in establishing a presence in the region amid the ongoing crusades.

As we celebrated Palm Sunday of the Lord’s Passion, we began a journey into Holy Week, culminating with our Easter celebrations. The journey embodies the walk on the sands and rocky paths that Jesus had walked, fallen, and traveled to Calvary. I am humbled to know that my brothers, past and present, work so hard to protect and preserve these sites in which our faith is centered.

May these past few days of our Lenten journey bring us a new respect for the people who are oppressed by war, the poor, alienated, lost and unwanted. May we have a true appreciation for one another as God’s created gifts. I end with a translated portion of Mary’s canticle;

May our souls proclaim the greatness of the Lord, may our spirits rejoice in God our Savior…for He has looked with favor upon us. He is RISEN, He is Risen, Alleluia, He is Risen.