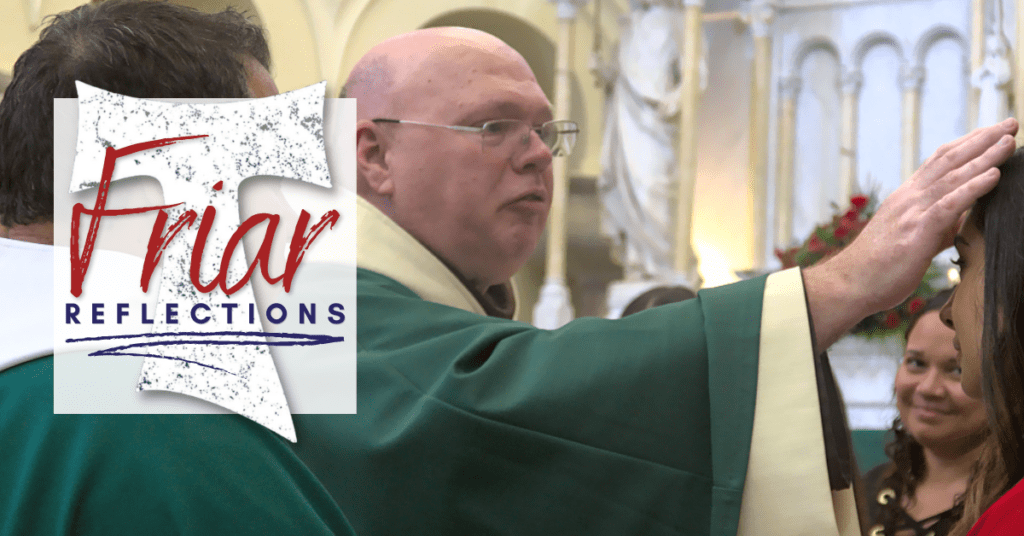 You’ve likely heard the friars speak recently about upcoming changes to the structure of the order across the U.S. After being asked by several parishioners, I thought I would give everyone an update of what is happening. A campaign regarding revitalization and restructuring is ongoing, with Franciscans from all six American provinces discussing ways to create new energy within Franciscan life in the U.S., as well as modifications to the governing structures for the Order of Friars Minor here.

While the number of religious is growing in Asia and Africa, it is dropping in Europe and in the U.S. Provinces that once were comprised of more than a thousand are now down to only a few hundred. Restructuring may allow more of the money generously donated to the Franciscans by the people of God to be dedicated to our works. For instance, there are savings which can be gained by combining vocation offices, accounting offices, communication offices, etc.

Last week, Henry, Zack and myself attended a gathering in Kansas City, MO for the Franciscan friars throughout the United States aged 65 and younger. Holy Name Province, which covers the majority of the east coast, including our parish, was one of the six provinces present at the meetings. The gathering was a blessing, and served as a chance for us to reconnect with or meet new friars from other provinces.

This process actually began in 2018, when the provinces of St. Barbara, Holy Name, Our Lady of Guadalupe, St. John the Baptist, Assumption of the Blessed Virgin Mary, and Sacred Heart gathered in their respective extraordinary chapters and voted on whether or not to petition the Minister General and the General Definitory to allow these six provinces to form a new, singular province. All six provinces voted yes. Since then, each of the provinces have worked towards this revitalization and restructuring goal. Franciscan vocation and formation teams have been working interprovincially for years, standing as a model of how the different provinces can work together.

Last week’s gathering and meetings allows us to shape what we hope the new province will look like. The friars today are much more diverse in race, culture, language, and in many other ways. We need a province that will reflect that diversity. A prevailing result of the meetings over the last four years has been the friars excitement about this new opportunity to come together as one. It is an opportunity to renew and revitalize our Franciscan charism and our fraternal life together.

From most people’s perspective on the outside, not much will change. Many of the same parishes will be staffed by many of the same friars. For us friars, there will be a much richer variety of possible ministry opportunities available. A young man may want to serve in a California mission, or with migrants on the southern border, or in one of our colleges and universities, or in different parish settings, or with different language groups, or in direct service to the poor, or some mixture of these ministries during his life. No longer will he be restricted to those ministries available only in the area of the country served by his current province.

In May, the name for this new U.S. OFM province was announced as Our Lady of Guadalupe Province. The name reflects St. Francis of Assisi’s devotion to the blessed mother and represents the patron saints of the Americas. Many of our ministries here at Sacred Heart already celebrate this important feast day. Our liturgy committee decided even before the naming of the new province that the parish would celebrate the feast of Our Lady of Guadalupe this December. In the past we have had special celebrations of this feast day, but they were one of many aspects of our parish life that was paused during the pandemic. I hope everyone will come join us in December as we reintegrate this parish tradition with new meaning and significance to our order.

Also recently announced was the location for the new provincialate (headquarters). Atlanta, GA was chosen for ease of access and weather. The new provincial office will also look to expand its ministry in the Atlanta metro area where much of the administration will soon be located.

The Chapter of Unity, the gathering where the six provinces will become one, will be held in Kansas City in October 2023.

Peace and all good,
Fr. Mike