Due to COVID-19, Sacred Heart will not be hosting in-person Stations of the Cross on Friday evenings during Lent. Instead, we invite you to join us for a virtual presentation. We have produced two different videos – one centers on the notion of Pax Christi, which is a Catholic peace movement promoting peace, justice, reconciliation, and respect for human rights throughout the world, and the other on St. John Paul II’s devotion to and care for creation and the urgent need for the Church to respond to its moral and spiritual dimensions.

We also invite you to watch this week’s reflection on the Stations of the Cross, presented by Sr. Cathy Cahill, OSF. Although we cannot gather together as a community, we hope you and your family enjoy and participate with us at home.

Due to COVID-19, Sacred Heart will not be hosting in-person Stations of the Cross on Friday evenings during Lent. Instead, we invite you to join us for a virtual presentation. We have produced two different videos – one centers on the notion of Pax Christi, which is a Catholic peace movement promoting peace, justice, reconciliation, and respect for human rights throughout the world, and the other on St. John Paul II’s devotion to and care for creation and the urgent need for the Church to respond to its moral and spiritual dimensions.

Pax Christi Stations of the Cross

We also invite you to watch this week’s reflection on the Stations of the Cross, presented by Fr. Stephen. Although we cannot gather together as a community, we hope you and your family enjoy and participate with us at home.

The flowers displayed in our sanctuary for the Christmas Season have been given in remembrance or honor of loved ones whose names are listed on the following pages. 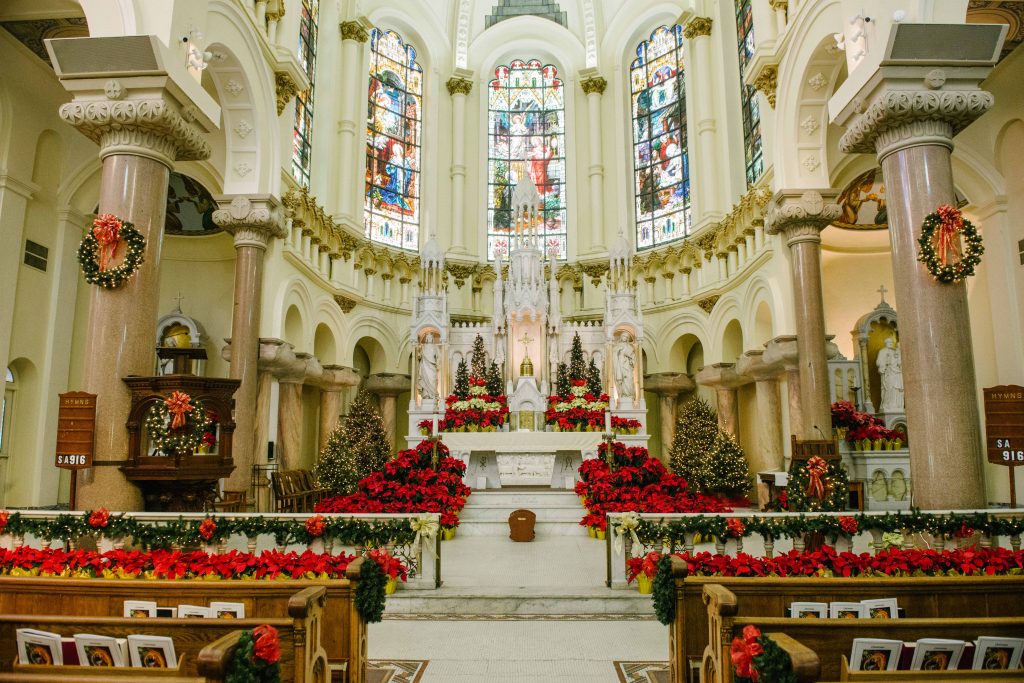 It’s Christmastime here at Sacred Heart! And with the Christmas season comes many of our favorite traditions that we usually celebrate together – like our choir singing Christmas carols or the annual Children’s Christmas pageant. Since we can’t be together in person this year, we’ve recorded videos of both so that you can watch in the comfort and safety of your own home. We hope you enjoy both of these presentations. Merry Christmas!

Make Your Plans to Celebrate Christmas With Us
We have been working hard to provide you and your family with as many options as possible to celebrate the birth of our Savior while keeping everyone safe and healthy. Take a look at the many opportunities we have and learn more about each below:

Reserved Seats Still Available for Our Christmas Masses
Due to our limited seating capacity during the pandemic, Sacred Heart will require a reservation for each and every person wishing to attend any of our Christmas Masses, either at the church or at the North Campus. There are still limited seats available at select Masses. Please confirm your attendance by making a reservation.

Planning to Watch Online?
We know many of you remain hesitant to attend Mass in person for the safety of yourself and others. We will be live streaming on our Vimeo channel for the Christmas Eve 4 p.m., 11 p.m., and Christmas Day 9:30 a.m. Masses should you plan to view in the safety of your own home.

We are also offering Communion at our North Campus (3515 N. Florida Ave.) on Christmas Day, from 1 p.m. – 1:30 p.m., if you would like to receive the Eucharist from the safety of your car.

If you can’t join at these specific times, the livestream videos should be available to view 15 minutes after each Mass has ended. Watch here.

Don’t Have a Reservation for Mass?
If you don’t have a reservation for Mass, you can park across the street from the church and listen to Mass on your car’s radio. We will be broadcasting live each of our six Masses at the church on 89.3 FM. A Eucharistic Minister will also come to the parking lot during Mass to distribute Communion.

Prefer to Sit Outside for Mass?
If you feel safer outside, our 10 a.m. Christmas Mass at the North Campus will be an outdoor service. Bring your own lawn chairs or sit in one of the folding chairs provided. There is no reservation needed.

Safety Guidelines
Please note: Sacred Heart requires everyone who plans to attend one of our Christmas Eve and Christmas Day Masses to adhere to the following safety protocols:

Christmas Collection for Those in Need

Several of our ministries are teaming together to help those less fortunate this Christmas season and we need your support!  Join us on Saturday, Dec 12th from 10 am – 12 pm at our Sacred Heart North Campus (3515 N. Florida Ave. ) for our final donation drive of the year! This is a drive-through event, so there is no need to leave your car! PLUS, you have the opportunity to say hello to our friars! 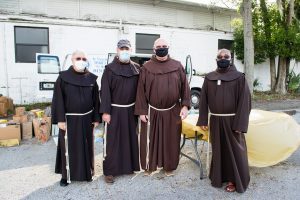 Suggestions on where to purchase “Budget Friendly” items:

Target – You can order online and pick up without leaving your car. Prices listed below reflect regular prices, not reduced.

Walmart – You can order online and pick up without leaving your car. Prices listed below reflect regular prices, not reduced.

A Special Invitation from Fr. Stephen

Join Us for Our Sacred Heart Thanksgiving
This year, with the help of our Open Doors and Knights of Columbus ministries, we’ve planned a combined event to foster a sense of connection with one another and to serve our larger community. Join us on Wednesday, November 25th, from 2:30 pm – 5:30 pm, for a Thanksgiving Dish Exchange and a Thanksgiving Food Drive, benefitting our St. Vincent de Paul Society food pantry.

Our food drive, collecting non-perishable food items, will serve the wider community, and our dish exchange will promote a sense of connection among fellow parishioners. This combined event promises to express our gratitude in tangible ways.

The friars will also be present offering blessings and Thanksgiving greetings. We know that you are still getting to know your new friars, so we look forward to seeing you. See below for more information on our Thanksgiving Dish Exchange and Food Drive. 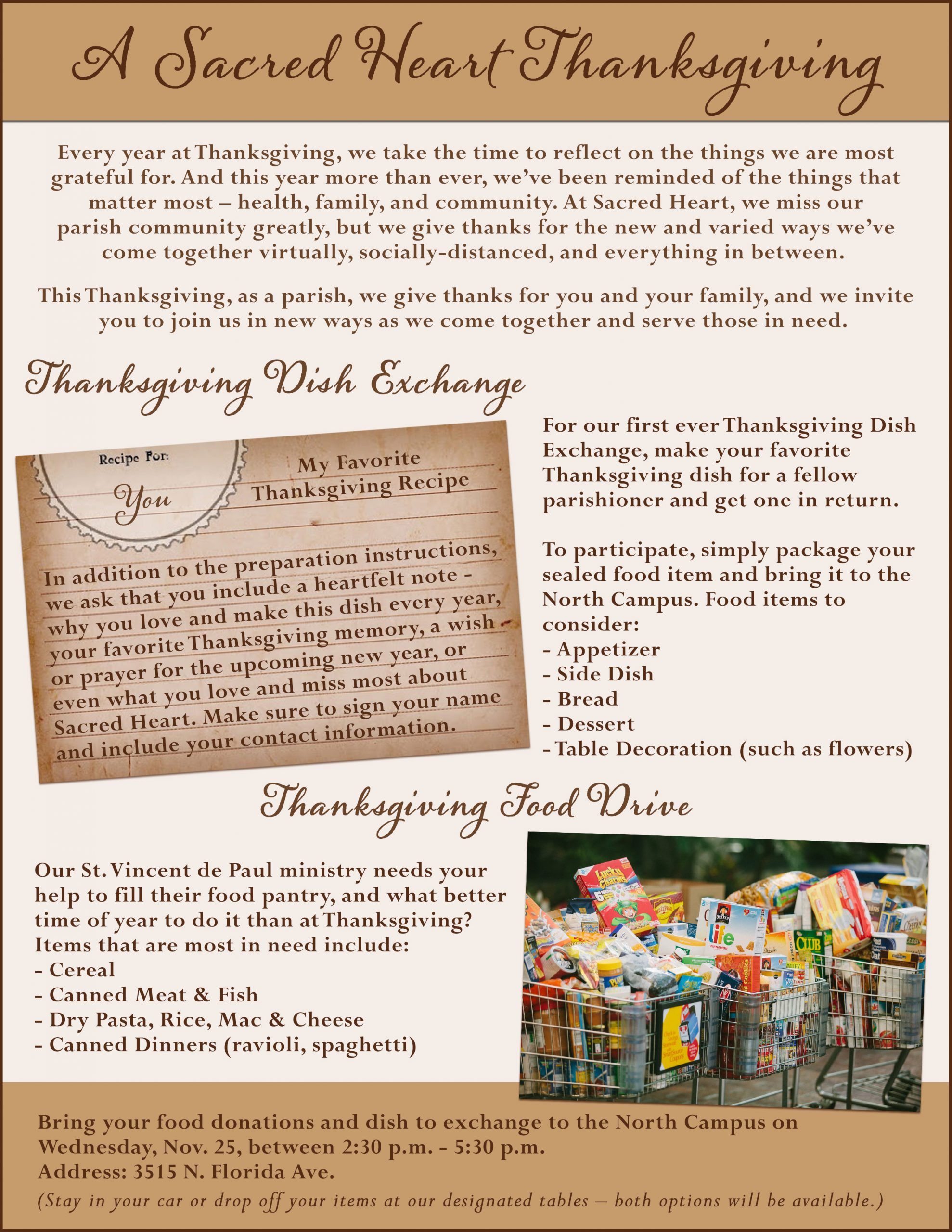 Over the last few weeks, we’ve brought you our version of a “Rapid Friar Challenge,” where our friars try and answer as many questions as possible in 60 seconds. Who do you think will win? Watch below to find out.

Over the last several months, we’ve brought our Sunday Mass into your homes through Facebook Live, but we’ve been busy upgrading our cameras, our sound equipment, and the technology we use to bring you the very best viewing experience possible.

Now you can see our Masses through our Vimeo platform.  Simply click here to view previous Masses or visit our Online Mass page to see our new Mass each week. We hope you continue to participate digitally with us at our new home, and if you have questions, visit our Vimeo FAQs for more information.

You may have seen some new faces here at Sacred Heart over the last few weeks! We are excited to announce our four new friars – Fr. Stephen, Br. Henry, Fr. Ron, and Fr. Mike. Watch their videos below to learn more about them, and make sure you welcome them the next time you see them at Mass.

Fr. Stephen Mimnaugh, OFM
Fr. Stephen is the youngest of four children of whom two brothers survive. Born in New Canaan, Conn., to the late John and Patricia Mimnaugh, the family settled in Simsbury, Conn., when Stephen was in second grade. Fr. Stephen earned his bachelor’s degree in political science and economics at the University of Vermont. After graduation, he completed a commercial-banking management-training program serving small and large commercial clients. Three years later he entered the diocesan seminary but later discerned that God was not calling him to the diocesan priesthood. Stephen transitioned into real estate finance and relocated to his adopted home of Philadelphia, where he remained until joining the Franciscans. He holds master’s degrees in urban policy from the University of Pennsylvania, theology and pastoral ministry from the Washington Theological Union, and social welfare from the City University of New York. His academic research focused on homelessness, supportive housing, public policy, and the role of community in poverty interventions.

Br. Henry Fulmer, OFM
I was born January 30, 1962, in Aiken, S.C. I was one of six children, born to the late Dorothy Lopez Ramos and Isadore Hartley and the proud grandchild of Henderson and Archie Mae Fulmer. I was baptized at St. Gerard’s Roman Catholic Church as a child, where I decided to answer God’s call to serve the church and God’s people. Though I was born in South Carolina, my family moved to Far Rockaway on Long Island in New York. I was raised there by my mother and consider Far Rockaway my home.

Fr. Ron Gliatta, OFM
Fr. Ron was born in New York City on Feb. 7, 1950. At a young age, he and his family moved to New Jersey where he lived for most of his childhood. Fr. Ron has a sister, Lorraine, who resides in Saddlebrook, N.J. As a child, Ron would fish with his father and grew to love deep-sea and fresh-water fishing. He is an avid animal lover, especially dogs. He enjoys theater , especially opera. However, it’s Fr. Ron’s passion and love for travel that has taken him all over the world. Among his favorite places are Rome, Australia, and Lourdes, France. As St. Francis said “The world is my cloister.”

I first went to St. Bonaventure Elementary School, then to Archbishop Walsh High School and graduated in 1983 from St. Bonaventure University with a BBA majoring in Management. I was fortunate to be educated by the Franciscan Friars and the Allegany Sisters.

At various times in my twenties I contemplated my vocation to be a Franciscan friar. In the Summer of 1994 I started as an affiliate in the Bronx, NY. In 1995 I went to the novitiate in Providence, RI. My novice master was Fr. Andrew Reitz, OFM who was here in Tampa many years ago. After novitiate I went to Silver Springs, MD where I studied at the Washington Theological Union (WTU). In 2001 I graduated from WTU with my Masters in Divinity. The same year I was also ordained in NYC.

For the past six years I have been at our parish in Anderson, SC. It is a small diverse parish with many wonderful parishioners. One of our main missions was to service the poor. We had a food pantry, we were active with the local soup kitchen, and also helped to create Clean Start, a place for homeless people to have a shower, wash their cloths, make phone calls, and receive their mail.

Over many years I have lived in NY, RI, CT, NY, MD, NC, and SC. Each place has offered many new growing experiences and ministries. It also has been wonderful living with various friars and meeting many new people. I look forward to my time in Tampa.